With her youth restored, Dora marries the King. Her sister essentially kills herself trying to restore her own youth and Dora’s restored youth eventually fades.

Violet kills her husband, returns to her father’s kingdom, and ascends to the throne.

Long Ending:
Based on the fairy tales of Giambattista Basille, this film presents three stories concerning royal families. The theme through all three stories appears to be that ill-fortune awaits those that indulge in selfish desires. The main characters are all present at King Longtrellis’ funeral at the beginning of the film (except for Dora) and Violet’s coronation at the end of the film.
Though interlocking in the film, each characters’ plots are separated in this Pooper.

Elias’ Story (the Longtrellis royal family):
The Queen of Longtrellis (Salma Hayek) is desperate to have a baby. A necromancer appears and says that forcing life comes at a cost, but the Queen immediately says any cost is worth bearing a child. The necromancer then states that the Queen will become pregnant if a sea monster is slain, its heart cooked by a virgin, and then eaten by the Queen. The King (John C. Reilly) slays a sea monster, but dies soon thereafter from his wounds (he is the sacrifice the necromancer warned of). The Queen has its heart prepared by a virgin and eats it. Both she and the virgin become pregnant. They give birth on the same day – the Queen to Elias (Christian Lees) and the virgin to Jonah (Jonah Lees). The children form a deep connection, consider each other brothers, and look virtually identical. Ultimately, the Queen unsuccessfully attempts to kill Jonah as she is jealous of the childs’ bond and concerned about Jonah’s motives. This causes Jonah to flee the Kingdom.

Soon after, Elias learns that Jonah is in trouble and goes in search of him. After Elias cannot be located, the Queen calls upon the necromancer. Again, the necromancer says a great sacrifice must be made before Elias can return. The Queen immediately agrees to any sacrifice.

Elias locates Jonah stuck in a cave. He goes to rescue Jonah when the pair are attacked by a giant bat creature. The creature tries to kill Jonah but hesitates when Elias intercedes. Elias fatally stabs the creature and he and Jonah escape the cave. Jonah returns home to his family and Elias returns to the castle where he becomes king. It is then revealed to the viewer that the necromancer had turned the Queen into the bat creature and that she had been killed by her own son.

Violet’s Story (the Highhills royal family):
The King of Highhills (Toby Jones) is an absent-minded King and father. His daughter Violet (Bebe Cave) has grown into a young woman and, taken with tales of passion, demands her father allow her to marry. The King ignores his daughter’s pleas as he is too busy spending time with a giant, magical flea that he has secretly been raising. Ultimately, the flea dies (ostensibly of old age). The King has the flea skinned and proclaims that any man who can identify the hide of the flea can have his daughter’s hand in marriage (seeming to believe anyone that could identify the flea would share his values). Many suitors try and fail to identify the animal skin and the King ignores all of Violet’s pleas to marry them anyways. Ultimately, an Ogre (Guillaume Delaunay) appears and identifies the skin as that of a flea. Violet threatens to kill herself, but the King insists it is her royal duty to obey his edict and marry the Ogre. Violet angrily agrees to uphold her father’s will and allows the ogre to take him to his lair located in the side of a cliff. She is essentially held prisoner, made to submit to the ogre’s sexual advances, and lives in filth.

One day, she sees a circus performer picking flowers near the cave and begs for rescue. The circus troupe erects a tightrope and carries Violet across the gorge separating the ogre’s lair from the land beyond. The ogre attempts to follow, but the performers cut the rope before he can cross the chasm and he plummets to the ground. The ogre is not killed by the fall. He manages to track down the circus performers and manages to kill them all. He demands Violet return to him and she appears to agree to his demands. Once the ogre’s guard is down, however, she decapitates him with a knife she stole from the performers.

Violet returns to her kingdom and finds the King has taken deathly ill since she departed. In anger, she tosses the ogre’s head at the King’s feet and condemns him for forcing her marriage to the brute. The King publicly breaks into tears and begs forgiveness for his callousness. She accepts his apology and is allowed to take over his throne. The King recovers his health and a large coronation is held (Elias, Dora, and the King of Strongcliff attend). A tightrope walker performs as she is lauded by her people.

Dora’s Story (the Strongcliff Royal Family):
The King of Strongcliff (Vincent Cassel) is a hedonistic sex addict who has worn out all of his courtesans. One morning, he hears beautiful singing in his village and pursues the singer to her home. Believing such a beautiful voice could only come from a young and pretty maiden, he insists the singer sleep with him. In fact, the singer is an unattractive old woman named Dora (Hayley Carmichael) who lives with her similarly old sister Imma (Shirley Henderson). Dora refuses to open the door to the king, but he persists in his pursuit. She ultimately succumbs to the King’s advances on the condition that they have sex only in the dark. After copulating, the King breaks his promise. Upon seeing that Dora is an old woman, he accuses her of misleading him and orders her guards to throw her out his window. She miraculously survives the fall from the King’s tower and is literally nursed back to health by a witch living in the woods. The witch also makes Dora young and beautiful. While on a hunting trip, the King comes upon the transformed Dora and immediately falls in love with her.

The King and Dora become engaged. Imma is invited to the wedding where Dora secretly reveals her true identity to her. Imma asks to be made young and also wants to live once again with her beloved sister. Not wanting to lose her status or wealth, Dora attempts to placate Imma with jewels. When Imma still refuses to leave, Dora impatiently states that she regained her youth after being flayed (claiming her younger skin emerged once her old skin had been cut off). The King then finds Imma and, mistaking her for the older version of Dora, has her forcibly removed from his palace. Imma takes the jewels given to her by Dora and pays a man to flay her skin off (essentially killing her – although her death is never confirmed).

The King and Dora are next seen at Violet’s coronation. While watching Violet ascend to the throne, Dora realizes that her youthful appearance is fading away. She flees from the ceremony, abandoning the King to live the rest of his years alone. 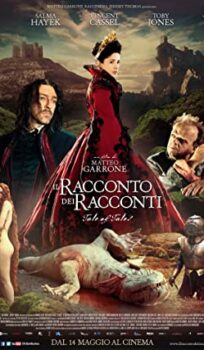