POOPER:
After a rough first inning, Virgil hypnotizes Sammy.  He then strikes out the side on nine pitches in the second inning.  Virgil and Bobbie start a new life together, and Sammy gets a new contract.

LONG VERSION:
Virgil Sweet (Edward James Olmos) is a scout for the last place California Angels.  He is constantly on the lookout for new talent, but he hasn’t found any lately.  Apparently, none of their scouts have, because new Angels owner Gil Lawrence (Terry Kinney) isn’t happy with the team’s farm system and he wants to fire all of the scouts and hire new ones.  However, General Manager Tim Weaver (Jamey Sheridan) promises to convince Lawrence to retain Virgil if he can find a good prospect.

Now looking for talent to save his job, Virgil and his girlfriend Bobbie (Lorraine Bracco), who works in the Angel’s front office as Lawrence’s assistant, travel together to look for talent, but they don’t find any worth signing.  On their way to Idaho to look at a hitter, Virgil’s car breaks down in the middle of nowhere.  While walking to a nearby town to find a payphone, they come across a high school game, featuring a pitcher who is striking everyone out.  After the game ends, Virgil introduces himself to the pitcher, Sammy Bodeen (Jeff Corbett), and he catches a few pitches from Sammy.  He is impressed enough to want to bring Sammy to Los Angeles for a tryout, but Sammy’s father is hesitant to allow it.  After Virgil has a talk with Sammy’s mother, and he promises her he’ll watch over her son, she convinces her husband to allow Sammy to go.

On their way to LA, Virgil tells Sammy the story of his former coach, who had the ability to hypnotize his players into being more confident.  Virgil pulls over to demonstrate it to Sammy as he pitches, but all Sammy does is throw balls through the car’s windows.  Now in LA, Lawrence wants to see Sammy for himself while he has his tryout.  A nervous Sammy throws his first few pitches all over the place, but after Virgil calms him down, he throws much better and impresses everyone.  Lawrence is also impressed, and he agrees to sign Sammy to a contract.

Instead of sending Sammy to the minor leagues, Lawrence decides to have him start for the Angels immediately, and he begins a new advertising campaign for the team that will center around Sammy, the Angels’ newest phenom.  After the press conference introducing Sammy, Virgil confronts Lawrence and tells him that Sammy is not ready for the Majors and he is making a mistake by starting him so soon.  Lawrence admits to Virgil that he is taking a risk by doing this, but he needs to do something to get fans to the ballpark to watch a bad baseball team, and Sammy is the way to get it done.  That same day, Sammy learns that his new teammates are resentful of him because he didn’t have to pay his dues in the minors like they did, and doesn’t show up to the next day’s practice.  Virgil, who was just promoted to Assistant GM by Weaver, goes to Sammy’s hotel room.  Sammy is afraid that he will fail and be like past phenoms who washed out.  Virgil tells him that everything will be alright if you just pitch like you know you can, and they drive together to the ballpark.

It’s now the night of Sammy’s first game with the Angels, and their opponent is the first place Kansas City Royals.  The stadium is sold out for the first time in a long time, and everyone is there to see Sammy.  Sammy is very nervous as he takes the mound, and he is having trouble making his pitches.  The Royals take advantage of Sammy’s ineffectiveness by scoring four runs in the first inning, and the crowd starts booing him.  Lawrence has seen enough and orders Weaver to call the dugout and have Sammy taken out of the game.  Virgil tells Lawrence that this is why starting him so soon was a mistake, and if he’s pulled out of the game now, it will destroy the kid’s confidence and he’ll never recover.  Lawrence then fires Virgil and gives Weaver the order again.  With Virgil quitting, Bobbie decides to quit as well.  Weaver calls the dugout, but tells the manager to have Sammy start the second inning, but to pull him out if any runner reaches second base.

Sammy comes out to start the second inning, much to Lawrence’s surprise.  The catcher goes to the mound to talk to Sammy, but it’s not the regular catcher, it’s Virgil.  He reminds Sammy about his coach who hypnotized his players, and Virgil does it to Sammy.  A now relaxed Sammy proceeds to strike out the side on nine pitches, and the crowd, as well as Lawrence, begins to cheer for Sammy.  After the game, Virgil admits to Bobbie that he was the catcher in the second inning, but he can never tell anyone otherwise he’ll be kicked out of baseball.

The movie ends with them driving off into the sunset as they start a new life together, but then we see Sammy in Lawrence’s office.  Acting as his own agent, he demands a new multi-year, multi-million dollar guaranteed contract.  Lawrence has no choice but to give it to him. 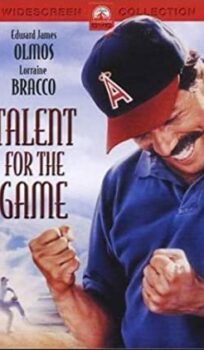