A young paperboy is kidnapped by a witch (Deborah Harry) so she can cook him! In an attempt to delay his death, the paperboy tells her stories (just like Arabian nights).

Lot 249 (Based on a short story by Arthur Conan Doyle)
Christian Slater “kills” the mummy that Steve Buscemi used to kill Julianne Moore and Robert Sedgwick. Slater then burns the scroll that Buscemi used to control the mummy, BUT it is the wrong scroll and Buscemi uses the scroll to reanimate the corpses of his victims to kill Slater.

Cat from Hell (Stephen King)
Inspired by unethical pharmaceutical testing on cats, a cat kills the loved ones of William Hickey. Hickey hires a hitman for $100,000 to kill the cat, but the cat kills the hitman and Hickey.

Lovers Vow (George A. Romero)
A failed artist (James Remar) sees a Gargoyle kill his friend in an alley and is offered mercy if he never tells anyone what he saw. Later that night he meets a girl (Rae Dawn Chong) who helps him find love and success. Ten years later he tells her what happened and she gets really annoyed about him breaking his promise. She and their children morph into Gargoyles and she kills him! 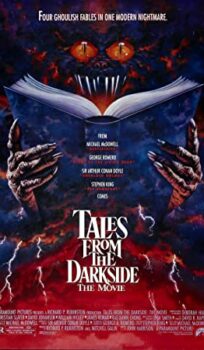