Barry Champlain (Eric Bogosian) is a Jewish liberal talk-show host in Dallas.  His caustic wit and knack for putting down his callers has made his show the #1 late-night talk show in the area.  He constantly receives death threats from his callers, which include Neo-Nazis, but he just shrugs them off.  The show is about to be picked up for syndication across the country, but Barry is getting pressure from his boss Dan (Alec Baldwin) to tone down the wit for his new audience.  When he learns that his show may go national, he calls his ex-wife Ellen (Ellen Greene), who agrees to come to Dallas to see his first national show.  Upon her arrival in Dallas, they rekindle their relationship and talk about getting back together.

When Barry has made it clear that he won’t tone down his act, Dan threatens to fire Barry if this prevents the syndication deal from being finalized.  On that night’s show, Barry begins to crack under the pressure of having to deal with his ignorant audience and agreeing to Dan’s demands while keeping his style.  Ellen realizes that Barry is becoming unstable and leaves him again.  Her departure triggers an angry tirade against his audience, telling them that he despises them and wishes that they would never call him again.  After the show, Dan tells Barry that was his best show and the syndication deal is safe, but it appears that Barry is ready to quit the show.  A pep-talk from his producer/girlfriend Laura (Leslie Hope) changes his mind, and agrees to come back the next day.

Just as Barry is about to leave the station, an autograph seeker comes up to Barry.  It’s actually one of the Neo-Nazis who has constantly threatened him, and he shoots Barry several times, killing him.  The end of the movie features the people who constantly called Barry’s show and their reaction to his death.  The majority of their reactions is that they hated Barry and his views, but not enough to kill him. 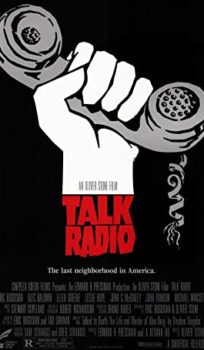