Stiles (Scott Glenn) and his henchmen eventually catch up to Daniel (Nick Stahl), Pecos Bill (Patrick Swayze), John Henry (Roger Aaron Brown), and Paul Bunyan (Oliver Platt) in the Endless Desert and hold them at gunpoint, and Stiles orders Daniel to fork over the deed to his family’s land. Daniel takes it out and tells the three folk heroes that they don’t have a prayer and they never did, and Bill remarks that, if that is the way he truly thinks, then they most likely don’t. Stiles tells Daniel and the folk heroes that you don’t stop progress, but the heroes implore Daniel to not listen to him and say that they can still beat this problem; he just has to believe, to try, and to not give up. Daniel responds by telling the trio that they are nothing but tall tales that his father Jonas (Stephen Lang) made up, then he surrenders the deed to Stiles. Bill, John, and Paul start to recite their credos in unison while Stiles laughs, and smoke then envelopes Daniel. When it clears up, he sees people working like slaves on the construction of Stiles’ railroad, and Jonas is among them. He then awakens in his rowboat, revealing that everything he experienced was just a dream. Apparently….

Daniel runs home and hugs his mother Sarah (Moira Harris), and she tells him that Jonas will be alright, for he is recovering nicely from the gunshot wound that Stiles gave him. Daniel goes to his father’s bedside and first apologizes to him for insulting their land before telling him all about his adventure with Pecos Bill and the others. Daniel returns the deed to him and says that they still have a chance to save Paradise Valley, but his father replies that he is selling their land to Stiles, saying that no piece of ground is worth dying for and it is about time that Daniel faced up to that, too. Daniel refuses to accept this and vows to do something.

Daniel ventures into a railroad construction site and steps into the path of Stiles’ train just as it is coming out of a tunnel, and it grinds to a halt in front of him. After getting word of his presence, Stiles gets on the balcony in front of the engine and orders Daniel to get off the tracks, but Daniel counter orders him to leave Paradise Valley. Stiles responds by commanding the engineer to run him over, and as the train starts to move, Daniel pushes hard against the pilot to try to stop it, despite the fact that it is an exercise in futility. He soon falls on his back, but before the train can kill him, John Henry suddenly appears and uses his immense strength to stop the train. Stiles summons for his henchmen and orders them to shoot Daniel and John, but before they can, Pecos Bill announces himself. When the goons turn their guns on him, he easily shoots off all of their trigger fingers, and this inspires the workers to join Daniel and John in pushing the train right back out of the other side of the tunnel. As this all happens, Paul Bunyan is shown using his ax to cut down all of the support poles in the tunnel to trigger a cave-in.

Paul meets up with Daniel after the train has been pushed out and gives him his ax so he can have the honor of taking down the last pole. Before Daniel can do so, Stiles approaches him and acknowledges that his back is against the wall before asking him to name his price, but Daniel refuses to accept any deals from him. Stiles warns that others like him will come in the future, and as long as there is a profit to be made, they will never stop coming. Daniel defiantly shouts that they won’t be coming through Paradise Valley, and then he chops down the last pole. As he runs back outside, Stiles tries to shoot him, but all of his bullets miss, and then he gets killed by falling debris. The jubilant townsfolk cheer Daniel when he emerges.

Daniel is then shown working on his farm again with the fully-healed Jonas. As the sun is setting, his father informs him that it is time to go into the house and wash up for supper, but Daniel tells him to go on ahead without him because he wants to stay out here for a moment. He then tells his father he loves him, which he returns. After Jonas goes, Pecos Bill, John Henry, and Paul Bunyan appear behind Daniel along with Bill’s horse Widow-maker, John’s mule Cold Molasses, and Paul’s blue ox Babe, and Bill tells Daniel that they have come to say goodbye. Paul thanks Daniel for the adventure, saying that he has his appetite back and that he and Babe are now heading up to the Alaskas because there are some tiny forests there that aren’t even half-grown yet, and then he hugs Daniel. John then comes up to Daniel and tells him that he plans to have a rematch with the steam drill he lost a contest with back in Liberty City (where Daniel met him), and Daniel lets him know that, if he needs a shaker, he can count on him. They all then recite the Code of the West, which Jonas sees from afar and joins in on, and John, Paul, Cold Molasses, and Babe soon disappear. Bill then bids Daniel farewell and leaves Widow-maker in his care before sending him off, and Bill makes his departure by lassoing and riding a twister up into the sky while reciting his credo. 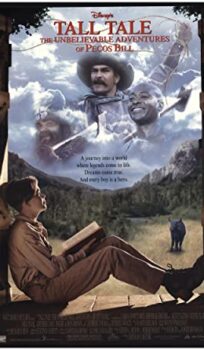