Ricky Bobby (Will Ferrell) is a pro NASCAR driver born to drive fast, as he follows the advice of his dad (Gary Cole)- “If you’re not first, you’re last.”

However, the arrival of Jean Girard (Sacha Baron Cohen) results in Ricky getting in a destructive crash during a race, eventually causing the loss of his career, his endorsements, and his wife (Leslie Bibb), who instead romances Ricky’s former best friend Cal Naughton Jr. (John C. Reilly).

Ricky comes back home with his kids, Walker and Texas Ranger, to live with his mom.  However, he finds himself rejuvenated by the return of his father, who puts him through a series of tests involving a wild cougar and a bag of cereal, mistaken for drugs.  He’s also motivated by a new love interest, a former assistant (Amy Adams) of his.

Ricky is motivated and faces off against Jean, who admits that he came to America merely to face off against him and get defeated.  However, he refuses to roll over easily, and the race is on the next day.  The two end up getting in a devastating crash, but climb out of their cars and begin running on foot.  Ricky eventually wins, and the crowd goes nuts.  Jean congratulates him, and Ricky hits him with a big kiss.

It’s later revealed by an official that neither man won the race, as getting out of their cars disqualified them.  Instead, Cal wins the race, his very first winning victory in the NASCAR circuit.  Ricky, his kids, his girl, and his mom and dad all head off to Applebee’s in the end, where they’ll likely get thrown out of after Ricky’s dad behaved all badly the time before.

(By the way, stick around for the bloopers at the end.  Best advertisement for Big Red ever.) 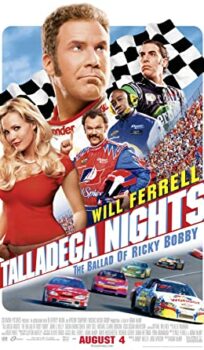