Rapunzel (voice of Mandy Moore) realizes that she is the missing princess and refuses to let Mother Gothel (Donna Murphy) use her hair for her own gain any longer.

Meanwhile, Maximus the horse helps break Flynn Rider (Zachary Levi) out of jail and takes him to Rapunzel’s tower.

After making his way up the tower, Flynn climes through the window only to see that Rapunzel is tied up and gagged. While he’s distracted, Mother Gothel sneaks up behind Flynn and stabs him so that her secret (kidnapping Rapunzel) will die with him. Rapunzel tells Mother Gothel that she will never stop fighting and trying to get away from her. However, she promises Mother Gothel that she will never try to leave if she is allowed to heal Flynn (earlier in the movie, Rapunzel tells Flynn that once she make a promise she never breaks it). Mother Gothel agrees and unties Rapunzel. Just as she is about to sing (singing “activates” the magic in her hair) Flynn, who doesn’t want her to live as Mother Gothel’s slave, cuts Rapunzel’s hair, thus destroying the magic in it. Mother Gothel, no longer having Rapunzel’s hair to keep her young, begins to age rapidly; she trips and falls out the window to her death.

Rapunzel desperately tries to save Flynn’s life; but, knowing his love is free from Mother Gothel, Flynn succumbs to his wounds and dies in Rapunzel’s arms. As she holds him, she sings the song that once started the magic in her hair and begins to cry. Her hair may no longer be magical, but her tears are! When her tears fall on Flynn, he is revived and healed. They share a kiss and the scene cuts to the king and queen (Rapunzel’s real parents). A messenger tells them that their daughter has been found. The family is reunited and the movie ends with Flynn explaining that he and Rapunzel got married and live happily ever after. 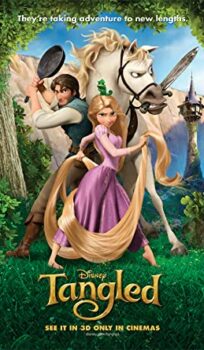