Tarzan, Jane and Prof. Porter get betrayed by Clayton, who was only interested in getting to the core of the gorillas’ habitat to be able to eventually capture and sell them.  When Tarzan realizes it, he yells for help, and his friends Tantor and Terk come along to rescue them.  They all rush into the jungle, just in time to find Clayton and his men attacking and capturing the gorillas.  A colossal, hilarious battle of men against animals take place.

Kerchak tries to face Clayton, but gets shot.  This enrages Tarzan, and he and Clayton get into a fierceful confrontation, climbing all the way up to, and around, the trees.  At some point, they come upon a nest of hanging lianas; then, Clayton attempts to attack Tarzan with a knife, but his entire body gets wrapped in lianas, and the more he struggles to loosen up, the more he is entangled.  Tarzan tries to stop him, but Clayton eventually loses his balance, and falls down, ending up hanged to death, which is shown through the shadow of a thunder (a very scary scene for a kids’ movie).

Tarzan comes upon a mortally wounded Kerchak and they both reconciliate and make up; the gorilla finally acknowledges him as his son and asks him to protect his “peers”, dying seconds after.  Then, Tarzan steps up to be looked up as the new leader of the apes.

Jane and Prof. Porter decide to return to England, and sail off in a rescue boat, to Tarzan’s sadness and dismay.  Yet, the professor realizes Jane is longing to be part of this new, strange world, and agrees to let her stay.  She jumps off the boat and joins Tarzan and the animals.  At the same time, moved by the same feeling, the professor bids the ship’s captain goodbye, asks him to tell everyone they were never found, and also joins the gang, thus both staying in the jungle.

The movie ends with a sequence of Tarzan, Jane, her father, Terk and Tantor gliding, jumping and running about the jungle, and Tarzan giving his trademark yell. 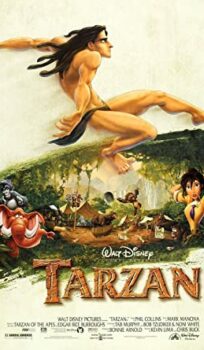