Pooper:
Robin discovers that Slade manipulated him and will be using his movie’s release to mind control the entire world to do his bidding. The Teen Titans reunite and manage to save the day while embracing their goofy ways. The rest of the heroes finally show respect for the team for defeating Slade.

Long Ending:
The Teen Titans (from the TV show) are comprised of the leader Robin (voice of Scott Menville), and team members Cyborg (Khary Payton), Starfire (Hynden Walch), Beast Boy (Greg Cipes), and Raven (Tara Strong). The team is very zany and easily distracted. While a giant villain wreaks havoc on the city, the Teen Titans are distracted by singing a song introducing themselves. The day is ultimately saved by Superman (Nicolas Cage), Wonder Woman (Halsey), and Green Lantern (Lil Yachty) who admonish the team for their antics before going off to the premiere of the new superhero movie “Batman Again.” The Titans attempt to attend as well, but are not on the guest list and have to sneak in. Therein, they realize every superhero (and superhero associated thing, like Alfred and the Batmobile) are getting their own movie… but not the Teen Titans.

The Titans approach superhero director extraordinaire Jade Wilson (Kristen Bell) who says that the Teen Titans will never get a movie because they are not heroic. The team decide to try and find an arch-nemesis that will make them more compelling and attempt to stop the villain Slade (Will Arnett) from stealing a gemstone. The team are thwarted when Slade distracts them from crimefighting. Remembering that Jade said she would only make a movie of them if the Teen Titans were the only superheroes on Earth, they time travel to prevent all other heroes from being created (i.e., stopping Krypton from destruction, stealing Wonder Woman’s lasso, preventing Bruce Wayne’s parents from being killed, catching Aquaman in plastic soda can rings). But they discover that eliminating all the heroes just leads to the world being taken over by villains and travel back in time again to set everything back the way it was.

The Teen Titans agree to take crimefighting serious and again confront Slade. This time, they succeed in maintaining focus, taking his gemstone, and locking it in their impenetrable vault. This act of heroism convinces Jade to finally give them a movie… if they stay serious. But except for Robin, all the Teen Titans cause pandemonium on the studio lot. Jade tells Robin that he needs to choose his team or a “Robin” movie… and he chooses his movie. The Teen Titans disband and Robin begins making a movie just about him.

The climax of the movie has Robin enter the Teen Titans’ vault to lock away the villain. Jade tricks Robin into accessing the actual Teen Titans’ vault. Once they enter, Jade reveals that she is actually Slade! Slade recovers his gemstone from the Titans vault and explains he needs the gem to power a device that will hypnotize the entire world when they watch Robin’s movie. Once hypnotized, the world will obey Slade’s every command. He then blows up the Teen Titans’ tower. Robin reaches out to his former teammates, and they soon reunite.

The Titans crash the Robin movie premiere and expose Slade’s plan. But before anyone can react, Slade activates his machine and hypnotizes the world but for the Teen Titans. He also has a giant robot to protect his machine. The Titans manage to defeat all the heroes, but Robin is hypnotized during the fight. The Titans bring him to his senses by playing a home movie they made of him as an actual hero (which makes him finally value his team over his own fame). The Titans embrace their goofy ways and use their singing and superpowers to defeat Slade and break his machine, freeing everyone from Slade’s control. The heroes, led by Robin’s mentor Batman, finally applaud the Teen Titans for their heroism.

In the mid-credits scene, the Teen Titans from the original version of the TV show hack into the credits and say they have “found a way back.” The end credit scene shows that the superhero group the Challengers of the Unknown are still floating in the black void Raven trapped them in. 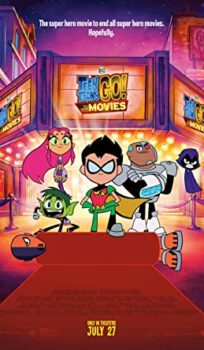