Cautionary Tale:
The young man tries to get close to 3rd wife with no success. The 2nd wife goes missing. Her husband (the young man’s older brother) kills a mysterious stranger who keeps visiting the camp, believing him to be responsible. The stranger’s tribe seek traditional retribution and spear the older brother. The older brother dies from his wounds. It turns out 2nd wife had been sold to a desert tribe (not by the stranger) and escapes too late, returning after her husband’s funeral. As per tradition the young man becomes husband to his late brother’s wives and finally can be with the 3rd wife, however the other 2 wives now bicker over him and demand all his attention, meaning he is still unhappy. (the cautionary tale is filmed in colour)

10 canoes:
Dayindi’s brother hopes the story has taught Dayindi a lesson about desiring inappropriate things and what it is actually like to get them. (filmed in black and white)

The narrator jokes that ‘they all lived happily ever after’ and adds that no one knows what happened after that. Perhaps Dayindi finally got a wife and perhaps he didn’t. (as Dayindi and his brother walks off into the distance, the scenery changes from black and white to colour as the narrator narrates the ending). 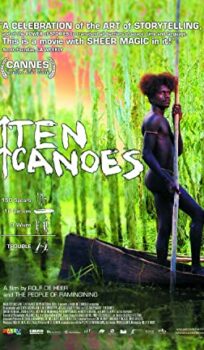