SHORT VERSION:
Piper finds out that Julia is not the daughter she gave up for adoption; Noah and his ex-wife are her birth parents. After Noah finds out that this is why she associated herself with him and Julia, he is initially disappointed, but since he has come to care for her very much and she and Julia have already developed a close bond, he eventually tells her that he and Julia want her in their lives.

Jen gets a chance to meet her online crush “fuzzy22”, but upon seeing that he is an attractive man, she runs before introducing herself, believing that he would be disappointed with her appearance. However, thanks to some engineering by Priestly, “fuzzy22” comes into the sandwich shop one night and surprises her, and he tells her that she is exactly what he hoped she would be while also introducing himself as Jeff. They end up becoming a couple.

Tish’s relationship with Tadd falls apart after he tries to force her into a threesome with his close friend Brad one night, and on the following night, she tells him they are done. She then accuses him and Brad of having a mutual homosexual attraction and use threesomes to get intimate with each other while pretending to be straight, and he responds by hitting her. Priestly and then Trucker come to her defense, and Trucker clobbers Tadd using some hitherto unseen fighting skills. Tish and Priestly later go steady, and he expunges all traces of his punk look for her.

After Trucker beats up Tadd, he takes his employees to his house and shows them his high school senior yearbook, where they find out that he was a football team captain and class president. He adds that he also actually fought in the Vietnam War, and it’s because of this that he is so hesitant to ask out Zo. However, the others then find Zo in the book as a freshman. He talks to her and learns that she always knew of his past and that she has had a crush on him since high school, but couldn’t work up the nerve to approach him because she still carried high school within herself. They become an item, and the film ends with their commitment ceremony.

LONG VERSION:
One day, Piper (Elisabeth Harnois) and Tish (Danneel Harris) accompany Jen (Clea DuVall) on a road trip to Morro Bay so she can meet her online crush, “fuzzy22”. They go to the bar Jen agreed to meet him at, and they spot a handsome man from afar with a white rose on his table, which he told Jen would be present so she could identify him. However, Jen suddenly gets cold feet and runs out of the establishment. She later tells Piper and Tish that she couldn’t bring herself to approach him because she doesn’t even remotely consider herself to be attractive enough to get a guy like him, plus she has come to care about him after all of the chatting they have done, so it would be unbearable for her if he saw her and became disappointed. They return to Santa Cruz and to the Beach City Grill the next morning, and when Priestly (Jensen Ackles) finds out about what went down, he criticizes Jen for leaving the guy hanging out of being terrified that he was going to judge her on the basis of her looks and that she had judged him in much the same fashion. He angrily walks out of the shop with Tish chasing after him, and they argue over what Jen went through. Priestly tells Tish that he considers it pathetic that Jen couldn’t rise above the superficial stuff, and then he asks Tish why some people can’t see a good thing when it’s standing right in front of them. Believing that he was actually asking her that question indirectly, since she knows he is attracted to her, she asks him if he is mad with Jen or really with her, and he replies that she can let him know if she figures out that there is a difference. That night, after Jen leaves the Beach City Grill, Priestly notices that she left her computer on, and fuzzy22 is messaging her.

Around the same time, Tish is shown getting physical with Tadd (Sean Wing) when suddenly his best friend Brad (Matt Barr) enters the bedroom and attempts to initiate a threesome, something he and Tadd have done multiple times before. Tish wants no part of it, however, and Tadd then says that he doesn’t know why she has her underwear in a bunch about it because he doesn’t consider her to be the most moral woman on Earth and says that one of the reasons he digs her is because she is so “experimental”. Tish starts to leave, but Tadd tries to coerce her into having the three-way, grabbing her to force her to stay. She gets free of his grip but falls and bangs her head on his dresser on the way down, cutting and bruising her head, and she shoves Tadd down before exiting. She comes into work the next day sporting a bandage on the wound, and out of embarrassment, she gives a false story to her co-workers about how she got it.

Piper goes on a date with Noah (Sean Patrick Flanery) that night, and as she finally musters up the courage to tell Noah her real name (he knows her as Anna) and why she has been associating herself with him and Julia (Adair Tishler) lately, Noah divulges a story to her about Julia’s estranged mother and how she almost killed herself and Julia in a murder-suicide attempt when Julia was five months old. When he says that the act was attributed to post-partum depression, this makes Piper realize that Noah and his ex are Julia’s birth parents and this little girl is not the one she gave up for adoption. She gets very upset, telling Noah that Julia is not her baby and her name isn’t Anna, and she runs back home and sobs.

The next night, Tadd enters the sandwich shop to collect Tish, but after they head outside, Tish condemns his actions from before and says she isn’t going out with him ever again, but he is scornful and unrepentant. She then accuses him and Brad of having a secret mutual homosexual attraction and that the only reason they engage in threesomes with a woman is so they can really have sex with each other while pretending that they are straight. Tadd becomes enraged at this accusation and smacks her, and Priestly then tackles Tadd out of nowhere in her defense, but he gets beaten down as well. Trucker (John Doe) then comes out and utilizes some hitherto unseen fighting skills to clobber Tadd, then warns him to never come near Tish again lest he receive an even worse punishment.

Trucker takes Tish, Priestly, and the others back to his house, and there they find out through reading his high school yearbook that his real name is Gordon Hancock and that he was the captain of his high school football team and class president. He explains that he never partook in the hippie lifestyle because he got drafted into the Vietnam War, and he did three tours and took many lives. When his service was up and he returned home, he fell into a depression until he joined a group of crazy surfers, after which he changed his name to Trucker and vowed to never harm another human being again (he explains to Tish that he didn’t mind beating up Tadd because he considers him inhuman). He then asks Tish to stop dating creeps and find a “nice guy”, but Tish takes a look at Priestly and says that nice guys don’t ask her out. Piper asks Trucker if his past is the reason why he is hesitant to ask out the peace-loving Zo (Alice Krige), and he confirms it. However, Jen suddenly finds Zo listed as a freshman in the yearbook and points her out to Trucker, which means she must already know who he actually was. Trucker talks to Zo the following evening and she confirms that she always knew that he had served in the army, and she adds that he was her high school crush. She was unable to ask him out back then because she was a brainy, dowdy, and shy type and he was the handsome football captain, and she had trouble asking him out now because she still carried high school within herself. He apologizes for taking so long to approach her, and they kiss.

On the same day, Noah comes up to Piper outside the Beach City Grill, and he asks for – and receives from her – the full story regarding the daughter she gave up and how she came to believe that his Julia was that daughter. He tells her that she should’ve just asked him about Julia’s parentage, but she replies that, when he was vague about her past, she assumed that he didn’t want her to know that she was adopted. When he asks why she lied about her real name, she answers that her real name is not a common one and he thus might remember it from the adoption papers. She says she never intended on becoming a part of their lives, but Noah points out that she has, though it now just seems like a lie. Piper says that she never wanted to give up her baby, and then asks him if he would think about his daughter for the rest of his life if she was suddenly taken away from him. When he says yes, she asks him how that is any different from her case, like her love for her child is just a whim while his is real. Before walking away from him, she lastly says that at least he has his daughter; all she has now is the ghost of two Julias. The next day, Noah and Julia enter the Beach City Grill to see Piper, and as they all take a stroll outside, Noah tells Piper that he and Julia have decided to make her a part of their lives, which Piper happily accepts.

That night, a vagrant comes into the sandwich shop and approaches Jen, and he soon tells her that she is very pretty and exactly what he hoped she would be. He then sheds what turns out to be a disguise, revealing himself as the handsome man Jen saw days ago, and he calls Jen by her Internet handle before presenting her with the white rose and then embracing her. Priestly then informs Jen that he spoke with “fuzzy22” the night she forgot to log off (and obviously gave him a full explanation as to why Jen stood him up and also gave him directions to the shop). “fuzzy22” then heads out with Jen to get some face-time, and he introduces himself as Jeff (Jordan Belfi). A day or two later, Priestly enters the shop and approaches Tish, but with all traces of his punk look expunged and wearing Banana Republic clothes. He then asks the pleasantly surprised Tish out to dinner, but she agrees to do so only if he reveals his unknown first name. He hesitantly says that it is “Boaz”, and she replies that her name is actually short for “Platisha”. She soon kisses him as a form of agreement to the date, and they later go steady.

We last see Trucker and Zo having a commitment ceremony in the nude on the beach, with all of the new couples in attendance. 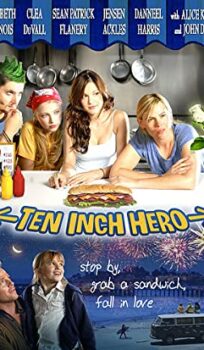