John Stewart (Randolph Scott) is a wealthy respected rancher in a small western town.  He sends for his brother Adam and nephew Howie to come from Ohio and live with him.  Wick Campbell (Richard Boone), the saloon owner, is envious of Stewart.  Maria is a girl whose father worked for Wick and owed Wick money.  Wick is obsessed with her, but she despises him.  Maria and Howie fall in love.  This drives Wick to a jealous rage.  Wick hires ten gunslingers to help him take on Stewart.  One of the hired guns picks a fight with Howie.  However, Howie kills the hired gun in self defense.

They think they have killed Stewart.  The hired guns begin to celebrate.  They turn on Wick, taking all the liquor from his saloon, and breaking open his safe to steal his money.  Wick learns where Maria is hiding out and goes there to force her to go with him.  Stewart is also there and kills Wick.  Stewart returns to town and kills off the hired guns.

Howie and Maria marry, in a double wedding with Stewart marrying Corinne. 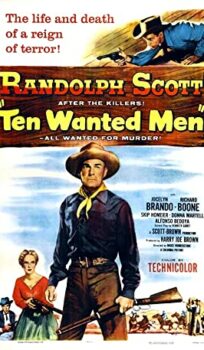