Pooper:
The Protagonist (John David Washington) turns out to be the leader and mastermind of the whole Tenet organization, in the distant future.

Longer Version:
The Protagonist learns from Sator’s (Kenneth Branagh) wife Kat (Elizabeth Debicki) that, due to Sator being sick from terminal cancer, he plans to use a yet-unknown device to reverse the entropy of the planet, which would reverse the climate change problem, but, in turn, also completely wipe out humanity by eliminating all chain of ancestry from the beginning.

With the help of his “handler” Neil (Robert Pattinson), The Protagonist follows Sator back in time to a moment when Sator was at his happiest with Kat, which is when he plans to set off the device upon killing himself. They storm the secret room -located in an abandoned Soviet complex- where the device is contained, while a Sator henchman attacks them and what seems to be a corpse with a red string reacts, takes the bullet and disappears through the tunnel in which they came in, thus allowing them to capture the device. At the same time, Kat gets to Sator and kills him to prevent him from setting his plan in motion by committing suicide.

While finishing the mission, The Protagonist notices a red string on Neil’s backpack, which means Neil was the same man who took the bullet for them while recovering the doomsday device… AND AT THE BEGINNING OF THE MOVIE, DURING THE SIEGE IN KYIV. The Protagonist actually recruited Neil in the far future, before they all time-travelled recurrently through the past, as part of their mission. He parts ways with Neil and further goes back in time; in London, he protects Kat from arms dealer Priya (Dimple Kapadia) and hints that he’d be the future leader of the Tenet organization -where everything would start-. 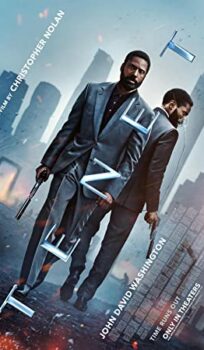