Sarah Connor (Linda Hamilton) stopped Skynet, but didn’t stop the deadly future that would follow. Her son John is murdered by a T-800, leaving her alone to hunt and kill Terminators while drinking to block out the painful memory of John. In the future, a new corporation called Legion has manufactured more advanced and deadlier Terminators, including the Rev-9 model that has come to the current present timeline.

Rev-9 arrives in Mexico City around the same time as an enhanced soldier named Grace (Mackenzie Davis). Both are looking for Dani Ramos (Natalia Reyes), who will one day become the new leader of the human resistance against Legion. Sarah finds the two women and helps fight off Rev-9 after he kills Dani’s brother and father. Sarah tells them that she has been receiving messages for years with coordinates to find and kill Terminators, all ending with “For John”. After outrunning Rev-9 again, the ladies trace the source of the messages to Carl (Arnold Schwarzenegger), who is the same T-800 that killed John. Although Sarah wants to kill him, he reveals that he integrated to human life after serving his objective, and he sent Sarah the messages to give her a purpose to keep fighting.

The team faces off against Rev-9 in a power plant, where Grace is severely weakened. She gives them her power core to kill Rev-9, knowing it will kill her as well. Carl plunges the power core into Rev-9’s head, which kills both of them.

Dani joins Sarah, and they find Grace as a child near her school. Not wanting the same fate to befall Grace, Dani begins training with Sarah for her future role. 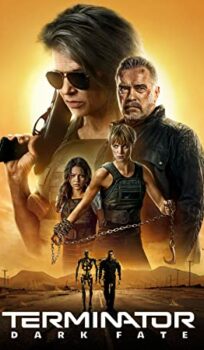