Long Ending:
Aurora Greenway (Shirley MacLaine) raises her precocious daughter Emma (Debra Winger) on her own in Houston, Texas. Aurora, despite having many male suitors (one of whom played by Danny DeVito) is very uptight and occasionally, downright mean. Nonetheless, she and her daughter have a very strong bond. Aurora is unhappy when Emma decides to marry her boyfriend Flap Horton (Jeff Daniels) graduating high school, rather than go to college like her best friend Patsy Clark (Lisa Hart Carroll). Flap and Aurora share a mutual dislike for each other.

Eventually, Flap and Emma have their first child and Flap gets a job at a university in Iowa. Although things start off well in Iowa (the pair even have another child, a son), their financial condition deteriorates. The two fight constantly and Emma accuses Flap of having an affair. Eventually, Emma begins having an affair herself with a local named Sam (John Lithgow). She and Flap also have a daughter together, their third child.

Meanwhile, Aurora finally decides to accept a date from her next-door neighbor, Garrett Breedlove (Jack Nicholson). Garrett was an astronaut who often stumbled around his property drunk and pursued women half his age. Although a romance is kindled between the two, Garrett is emotionally unavailable and unreliable.

Emma soon discovers that Flap was having an affair with a student named Janice. She separates from him for a while, returning home to Aurora and Garrett. The increased attachment to Aurora’s family causes Garrett to become uncomfortable and he breaks up with Aurora and moves from the city. Emma and Flap work out their differences and she agrees to move with him to Nebraska where he was offered a position as head of his department.

Things deteriorate once again and their oldest son grows especially hostile to Emma. Soon, Emma discovers that Janice is a graduate student at Nebraska and that Flap had secretly moved there to stay close to her. This seems to be the last straw, but shortly thereafter, Emma is diagnosed with untreatable cancer. She spends some time in New York with Patsy before she is permanently hospitalized.

Flap, Patsy and Aurora all stay at the hospital with Emma. Garrett, having heard the news, flies out to support Emma and also promises to fully commit to Aurora, with the two declaring their love for each other. Flap is truly sorry to lose Emma and the two ultimately agree to let Aurora raise the children. Emma says a tearful final goodbye to her children and tells her oldest son not to ever blame himself for his anger at her since she knows he actually loves her dearly.

Emma passes away. The children are understandably saddened but are being taken care of by Aurora and Garrett. Patsy and Flap are shown to also still be a part of their lives (With Aurora and Flap having seemingly made peace with each other). 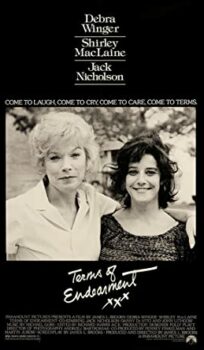