Pooper:
The paranormal investigators are all killed. Detective Funes is able to burn down one of the houses before fleeing into the night. Later, three new police officers approach Juan to ask about what happened, unknowingly followed by the charred ghost of Rosentock.

Long Ending:
This movie is presented in a non-linear fashion, but this Pooper presents events in chronological order.

A man named Walter (Demián Salomón) lives in a small row house in Argentina. He’s been haunted at night by supernatural occurrences. The paranormal events are so violent that the wall between his house and his neighbors (Juan and Clara) is cracking. Walter desperately tries to get in touch with a woman named Doctor Albreck (Elvira Onetto) who is a paranormal investigator, but she refuses to visit unless he can get proof of the haunting. That night, he sets up a camcorder. When he awakens in the middle of the night, he watches the footage and sees that a giant, naked ghoul emerged from under his bed and moves things around his house. He gets a gun, but the ghoul attacks and seemingly possesses Walter.

Some time later more paranormal events spread through the neighborhood. Clara hears voices in her drainpipe saying they will kill her. Much to Juan’s horror, he later finds Clara being killed by an invisible force in their bathroom and is arrested for her murder. Additionally, a neighborhood kid is killed when playing near Walter’s home and scared off when he hears a voice telling him to get off the lawn. As the kid runs away in terror, he is hit and killed by a bus. However, the child’s corpse unearths itself and walks back to his home (driving his mother, Alicia (Julieta Vallina) insane).

A police investigator named Jano (Norberto Gonzalo), whose had prior dealings with the supernatural, is called to investigate the return of Alicia’s son. There, he meets Albreck who is there to meet Walter (after somehow getting the recording of the ghoul). They get permission from Juan and Alicia to spend the night in the three houses (Juan, Alicia, and Walter) to investigate. Jano spends the night in Alicia’s house, Albreck in Juan and Clara’s, and Albreck’s colleague Rosentock (George L. Lewis) and Alicia’s ex/retiring detective Funes (Maximiliano Ghione) stay in Walter’s.

All of them immediately begin experiencing paranormal events. Funes – the only non-supernatural expert – learns from Albreck that the hauntings are the result of parallel dimensions overlapping. These spirits travel through water and wish to drink blood. Indeed, only by shifting perspective can the spirits be seen (i.e., looking under Walter’s bed from the North and everything will seem normal, but looking at it from the South will reveal numerous writhing spirits nesting there). The spirits are violent – stabbing Rosentock through the hand, blinding Jano and stuffing him in a cabinet, and hiding Walter’s possessed body in the crack in his wall. The three experts also admit they have no idea how to stop the spirits and merely wish to observe them.

Eventually the ghouls kill Jano and Albreck. Funes is so terrified that he has a heart attack. As Funes prepares to run away, Alicia returns with her reanimated undead son and hangs herself in her house. Funes eventually manages to flee the scene. However, after collecting his wits, Funes returns and burns down Alicia’s house despite the efforts of a possessed Jano to stop him.

The film ends some time in the future with three cops approaching Juan (who is confined to an asylum). They explain that Funes is on the loose and that Rosentock was burned to death in the fire he set. They are hoping Juan can explain what happened. Instead, Juan says that the burned spirit of Rosentock is sitting behind them (though the cops can’t see him due to their perspective). To the cops’ horror, a chair suddenly is flung through the air at them (presumably by the spirit of Rosentock) as the film ends.

Order of Deaths (in rough chronological order as some events occur simultaneously): 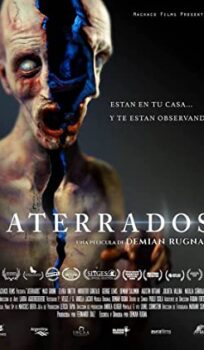