Pooper:
Art returns from the dead and goes on another killing spree. Siblings Sienna and Jonathan manage to seemingly kill him after they decapitate the killer clown with a magic sword. However, Art’s demonic friend, the Little Pale Girl, steals Art’s head, and Vicky somehow later gives birth to Art’s head (which, despite lacking a body, seems alive and sentient).

Long Ending:
Despite being seemingly killed in the first film, Art the killer clown (David Howard Thornton) returns from the dead. As a new Halloween season approaches, he prepares to engage in another reign of terror. Meanwhile, a teenager named Sienna (Lauren LaVera) prepares for Halloween by making an angel warrior costume based on a comic character her dad created before he died. She also inherited a sword from her dad.

Both she and her brother Jonathan (Elliott Fullam) see glimpses of Art (who is famous from his exploits in the first film) throughout their town. The pair also see his demonic companion, the Little Pale Girl (Amelie McLain), who dresses like Art and is seemingly invisible to everyone but them and Art. Their mother Barbara (Sarah Voigt) doesn’t believe them even though the siblings discover their dad predicted the arrival of Art before he died. On Halloween night, Sienna goes out in her warrior angel costume. Meanwhile, Art kills Sienna’ friend Allie (Casey Hartnett) and Barbara, and kidnaps Jonathan. Impersonating Jonathan, Art and the Little Pale Girl trick Sienna into coming to the abandoned fairgrounds where they are keeping Jonathan trapped inside of the “Terrifier” – a haunted house ride.

At the fairgrounds, Art kills Sienna’s other friend Brooke (Kailey Hyman), and maims Brooke’s boyfriend. He then chases and brutally beats Jonathan and Sienna. Though the siblings strike seemingly fatal blows on the clown, he continues to get back up. Eventually, Art stabs Sienna and seemingly traps her in a dream dimension.

Sienna almost dies until her sword, revealed to be magical, heals her. She makes her way to her home dimension, where she finds Art gnawing on Jonathan’s passed-out body. She attacks with her sword and eventually slices off Art’s head. The siblings celebrate their victory but witness the Little Pale Girl carry away Art’s decapitated head.

In a mid-credit scene, the lone surviving (and heavily disfigured) victim from the first film Vicky (Samantha Scafffdi) has gone fully crazy and claims to love Art. She supernaturally becomes pregnant and gives birth to Art’s decapitated head, and the head is seemingly alive despite lacking a body. 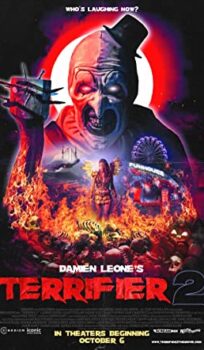