Sherlock Holmes (Basil Rathbone) and Watson are hired to protect a valuable diamond, called the Star of Rhodesia.  It is owned by Lady Margaret, who is travelling by train with it.  Soon after the train starts, her son is murdered, and the diamond is stolen.  Watson tries to solve the case on his own, with unfortunate results.

Holmes figures out that Watson’s new friend, Duncan Bleek, is the mastermind behind the crime.  Bleek is really Sebastian Moran, an old enemy of Holmes.  The police who arrest Bleek near the end are actually part of the plot.  They are accomplices of Bleek, there to get him off the train if needed.  Holmes sees through it, and has them arrested too.  The diamond is recovered for Lady Margaret. 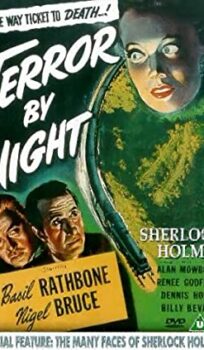