Alana (Jamie Lee Curtis) discovers the magician (David Copperfield) dead, meaning that he wasn’t the killer after all.

Turns out Kenny (Derek McKinnon) was disguised as the magician’s female assistant all along.  Alana and Kenny struggle until Carne (Ben Johnson) intervenes and knocks Kenny out of the train car with a shovel, just as the train heads over a bridge.

We see Kenny’s lifeless body drifting down the partially frozen river and the credits begin to roll. 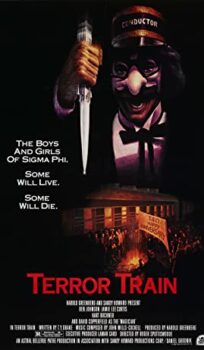