Texas Chainsaw Massacre: The Next Generation(1995)

While being held captive by the Sawyers, Jenny (Renee Zellweger) is told by Darla (Tonie Perensky) that Vilmer (Matthew McConaughey) has connections with the Illuminati (which probably explains how the Sawyers have managed to avoid the law all this time). The Sawyers are eventually paid a visit by Rothman (James Gale), an Illuminati agent, and after he sees Jenny in her state, he sternly tells Vilmer that what is going on here is appalling, and that he is supposed to be making people know the meaning of horror. After warning Vilmer to not be a “silly boy,” he licks a disgusted Jenny’s face and leaves.

Jenny attempts another escape, but Vilmer grabs hold of her and tries to get Leatherface (Robert Jacks) to behead her with his chainsaw. Thankfully, Jenny manages to get a hold of one of the remote controls for Vilmer’s mechanical leg brace and makes it move like crazy. Vilmer takes out another remote and uses it to try to regain control of his leg, but Jenny ends up winning the duel and runs out of the house. Vilmer and Leatherface immediately go after her.

In the morning, she makes it to the main road and gets assistance from an elderly couple driving an RV, but Vilmer and Leatherface end up making the RV roll over onto its side. Jenny gets out of the vehicle and continues running on foot with Vilmer and Leatherface hot on her heels, but suddenly, a crop duster piloted by one of Rothman’s colleagues swoops down and kills Vilmer with the propeller blade. Leatherface starts screaming in horror and frustration, and then a black limousine shows up. Jenny jumps into it and quickly discovers that Rothman is inside, but Rothman stops her from jumping back out by assuring her that he isn’t going to harm her. The limo then takes off, leaving Leatherface to continue screaming and swing his chainsaw around.

Rothman apologizes to Jenny, saying that her experience was supposed to be a spiritual one, but it failed because of Vilmer. He drops her off at a hospital, and as a policeman is later questioning her, Sally Hardesty (Marilyn Burns) – the lone survivor of the first film – passes by her as she is being wheeled down a corridor on a gurney, and they both look at each other. The policeman asks Jenny if she knows who she is, but she is too shaken to answer. 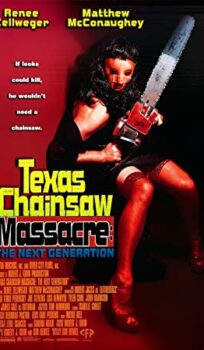