Set in southern Texas in 1875, Leander McNelly (Dylan McDermott) is asked by the governor to reform the Texas Rangers, which were disbanded during the Civil War.  Bandits from Mexico are coming into Texas and stealing cattle and killing ranchers, but the Union army is fighting the Indians and are unable to help.  McNelly is able to recruit some veteran Rangers, but the rest are young men with little to no gunfighting experience.  One of the young recruits is Lincoln Rogers Dunnison (James Van Der Beek), who had just witnessed his parents murder by the leader of the Mexican bandits, John King Fisher (Alfred Molina).  Fisher and his men are responsible for the deaths of dozens of ranchers and other civilians, and the theft of hundreds of heads of cattle.  While all this is going on, it’s revealed that McNelly is dying of tuberculosis.

McNelly and the Rangers track down Fisher and the bandits, but are lured into a trap by Fisher and many Rangers are killed in the resulting gun battle.  After recruiting more young men to join, McNelly and the Rangers track Fisher to the Rio Grande River, but he and the bandits cross the border to prevent capture.  That night, McNelly and Dunnison, who has become a leader amongst the Rangers in a short amount of time, set up a plan to cross the border and capture or kill Fisher and his men once and for all, even though they are not allowed in Mexico.  The Rangers cross the border and attack the bandit’s hideout.  In the ensuing gun battle, most of the bandits and some of the Rangers are killed.  McNelly tracks down Fisher but Fisher is able to wound McNelly and is about to kill him when Dunnison shows up and shoots Fisher.  Remembering that Fisher was responsible for murdering his parents, Dunnison proceeds to shoot Fisher several times, killing him.  The surviving bandits eventually surrender and are taken back to Texas.

At the end of the movie, McNelly dies of tuberculosis, but not before handing over control of the Rangers to Dunnison.  Dunnison and the rest of the Rangers bury McNelly, then ride off to continue protecting the people of Texas. 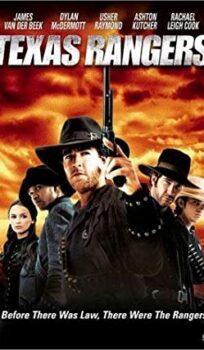