Four members of the starting lineup of a Catholic high school basketball team have gathered to celebrate, on the 20th anniversary of their victory in the Pennsylvania state championship game. The Coach (Robert Mitchum) is terminally ill, and this reunion may be their last chance to reminisce with him. However, the fifth member of the starting lineup, Martin, has refused to attend the reunion; he bears a grudge against the Coach, for reasons that do not become clear until late in the play.

During the night, many unpleasant secrets are revealed. George is an incompetent mayor who is likely to lose his bid for re-election. While Phil helps George financially, he’s having an affair with Georghe’s wife. James hates his job, and secretly asks Phil to help HIM run for mayor against George. And the Coach is revealed as a racist and a bully. The reason that Martin has shunned the reunion is that, in the closing minutes of the championship game, the Coach ordered Martin to cripple the “big nigger” center for the opposing team. Martin has never forgiven the Coach for that.

The Coach and all the former players seem to hate each other, and they seem to realize that even the one great victory they once shared together is tainted. But when the Coach plays an old recording of the radio broadcast of that championship game, they all begin weeping, they all pull together, and promise to support each other. Nothing seems to have gone right in these men’s lives, but that one happy memory of that one championship season pulls them together, if only temporarily. 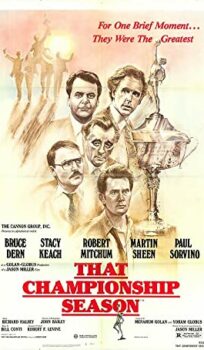