SHORT VERSION:
Lizzie’s kidnappers are Ma and Pa, the owners of the malt shop that Patti frequents. They committed the crime because: A) They partied away all of their money in Monte Carlo and the Mayan Riviera and hoped that the ransom money they demanded from Lizzie’s employer, President Flint, would replenish their coffers (though this idea was already doomed from the start because Flint is flat broke), and B) They were bored out of their skulls from living in Edgefield.

Patti, Zeke, and the former’s cat D.C. uncover Ma and Pa and are ultimately able to bring them to justice and save Lizzie following a car chase around town, and afterward, Lizzie reunites with Flint and his wife. Patti and D.C. make the town’s newspaper for their help in solving the case, and Patti becomes popular at school and adopts a more positive attitude about her life and Edgefield, which reflects in her wearing more colorful clothes as opposed to all-black attire. Zeke is praised by his captain for his success and he maintains a friendship with Lizzie, and D.C. has a litter of kittens with a female cat to whom he has long been attracted to.

LONG VERSION:
Captain Boetticher (George Dzundza) boots Zeke (Doug E. Doug) off the kidnapping case after he and some other F.B.I. agents tail D.C. on one of his nightly prowls in the hope of being led to Lizzie (Rebecca Koon) and her kidnappers and they end up finding nothing. Worried that he might lose his job if he doesn’t solve this crime, Zeke returns to Edgefield and continues the investigation with Patti (Christina Ricci). However, after they spend a night following D.C. around and come up with nothing again, Patti finds D.C. outside of a random building covered in stickers as well as twigs that look like the blood-stained twig Zeke had earlier found in D.C.’s fur and sent to the F.B.I.’s lab for analysis, and Patti (incorrectly) deduces that D.C. got the twig outside this building and Lizzie must have gotten dragged through the leaves out here. Just then, some cops show up to arrest them on suspicion of prowling, and Zeke tries to show them his F.B.I. badge, but D.C. snatches it from him and runs.

Boetticher is summoned to the police station and meets with Patti and Zeke in their holding cell. Patti tells him that she discovered the source of the bloody twig Zeke found, but he angrily informs her that the Bureau’s tests revealed that the twig is actually a maraschino cherry stem, and he calls Zeke an incompetent agent and an embarrassment to the department. Moments later, Patti’s parents Peter (Michael McKean) and Judy (Bess Armstrong) show up, and Peter has already told Bess about Patti’s and Zeke’s investigation (he tried to keep it a secret from Judy at Patti’s request after he found out about it, but he ended up telling Judy earlier that night when she suspected that he was keeping a secret from her and became more than a little hurt by it). Boetticher apologizes to Peter and Judy for their daughter getting caught up in all of this and mentions that the watch with “Help” etched on the back of it was a convincing piece of evidence, but Judy informs him that it actually read “Hell”. Patti is forced to admit that she doctored that evidence (even though Lizzie was indeed trying to write “help”), and in light of this, Boetticher considers the Edgefield investigation closed.

Fed up with her parents, the town, and her lot in life, Patti decides to run away from home and heads to the train station and buys a one-way ticket to New York. She sees the butcher Lu (Megan Cavanagh) waiting for a train there as well, having opted to leave Edgefield herself after having unsuccessfully tried to drop several hints to the security officer Melvin (Thomas F. Wilson) that she has a crush on him in the form of small anonymous meat deliveries. They get to talking, and Lu tells Patti about her seemingly unrequited love for Melvin and what she tried to do to get him to notice her, and how she has come to the conclusion that either he just isn’t figuring it out, or he has but doesn’t feel the same way about her. Patti replies that she can get Melvin if she does something other than stare at him and leaves him anonymous pieces of meat, and there is a right way and a wrong way to get to know people. Lu tells Patti that she wishes she were more like her, for she considers her to be sharp, funny, outgoing, and well-dressed and bets she is popular, but Patti informs her that she isn’t popular at all. After hearing an announcement about the train coming, Patti tells Lu that they ought to cash in their tickets and give Edgefield another shot, and Lu agrees with her.

When they reach the town square, Patti tells Lu to be bold since Melvin is shy, and Lu thanks her and walks off for elsewhere (she soon goes up to Melvin and kisses him, and it turns out he has feelings for her as well and liked the meat she left for him). D.C. shows up near Patti moments later and she sees that he has a piece of Lizzie’s apron in his mouth, and then he has her follow him right to the hideout where Lizzie is being held. After seeing her tied up in there, Patti calls up Zeke from a payphone to give him the news, but he is still angry with her for damaging his career and refuses to listen. Patti tries to free Lizzie herself, but she – and D.C. – are caught by the mystery kidnappers, though she clearly indicates that she knows who they are.

While Judy and Peter are out at a cat show, Judy decides to call the house to check the answering machine for messages, but she hears the recording Patti made before she left informing anyone who calls that she is skipping town. She and Peter return home and call the police, then she telephones Zeke and asks if Patti is with him because she fears she has gone missing, but he says she isn’t. Sensing that Patti might be in trouble, Zeke returns to Edgefield, and through a combination of luck and trying to think like D.C. would, he finds the kidnappers’ hideout along with the mask-wearing kidnappers and the bound and gagged Patti, D.C., and Lizzie. The kidnappers then unmask to reveal themselves as Ma (Rebecca Schull) and Pa (Peter Boyle), the sweet-natured owners of the malt shop that Patti frequents. Zeke makes them drop their shotgun before freeing Lizzie, Patti, and D.C., but D.C. makes his allergies act up, causing him to sneeze and drop his gun and giving Ma and Pa the chance to pick up their shotgun. When Patti asks them why they committed this crime, they explain that they had partied away all of their money in Monte Carlo and the Mayan Riviera and were hoping to replenish their coffers with the ransom money (an idea that was doomed from the start because Lizzie’s employer, President Flint [Dean Jones], is flat broke), plus they did it because they were simply bored out of their skulls from living in Edgefield.

Ma and Pa grab Lizzie and their luggage and lock Patti and Zeke in the hideout, then head to Dusty’s (John Ratzenberger) auto repair shop/gas station to get their car so they can go on the lam. When they get it, we find out that Dusty’s rival Rollo (Mark Christopher Lawrence) has been sabotaging it in another attempt to harm Dusty’s business, and Dusty soon spots him and starts a big fight with him while Ma and Pa force Lizzie into their car and drive off with her. Patti, Zeke, and D.C. – having escaped the hideout through a window and having overheard where Ma and Pa were going – show up in the middle of this and take Rollo’s tow truck so they can chase after them. Thanks to Rollo’s tampering, Pa finds out that his car is unable to turn right, so he has to make some creative left turns everywhere he goes. The chase goes all over town and has indirect effects on multiple residents, and it comes to an end when D.C. – along with a bunch of cats that got set loose from the cat show during one of said indirect effects – jump onto Ma’s and Pa’s windshield and make them crash their car into Melvin’s and Marvin’s (Brian Haley) security office. Zeke gets Lizzie to safety, and then Melvin and Marvin shoot their office’s sign loose and make it fall on Ma’s and Pa’s heads, knocking them out. A little later on, many F.B.I. agents show up in Edgefield, as does President Flint and his wife. Flint and his wife meet up with Lizzie and hug her, and Patti is safely returned to her parents. Boetticher comes up to Zeke and praises him for saving Lizzie and says his father (who was also an F.B.I. agent) would be proud of him.

Dusty and Rollo – whose auto repair shops/gas stations both wound up getting destroyed through a combination of their fight and another indirect effect of the car chase – decide to settle their dispute by going into business together, and Melvin and Lu enter into a relationship. Patti and D.C. make the town’s newspaper for their help in solving the case, and Patti becomes popular with her classmates. She also adopts a more positive attitude about her life and Edgefield and starts dressing in colorful clothing as opposed to all-black attire, and she maintains a friendship with Zeke. D.C. hooks up with a female cat he is attracted to and has a litter of kittens with her. 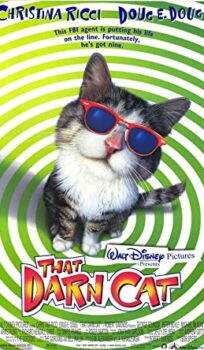