The group sings with Playtone and immediately joins their state fair tour. Along the way the song become a major hit, making them one of the most popular acts on the tour.

After their tour stop in Wisconsin, Mr. White (Tom Hanks) offers them a chance to leave the tour and to L.A., where they will appear in motion picture, perform on a popular variety show, and eventually go to the studio to record another album. After making their cameo in the movie and making a publicity stop at the Playtone headquarters, they prepare for their television appearance. However, the bass player (Ethan Embry) abandons the band the night before, instead leaving with a group of Marines.

Mr. White eventually finds a replacement bass player (portrayed by Larry Antonio) right before it’s time for the show to start. Their performance is a success, however during the broadcast, it’s mistakenly said that Jimmy (Jonathon Schaech) and Faye (Liv Tyler) are engaged. Afterwards, and infuriated Jimmy blames Faye, who had nothing to do with it. Hurt and shocked by Jimmy’s outburst, Faye breaks up with him. Meanwhile, Lenny (Steve Zahn) leave for Las Vegas, accompanied by a receptionist he met at the Playtone headquarters.

The next day at the recording studio, Jimmy and Mr. White get into an argument about which songs the band will record on their next album, Jimmy ultimately quits. Lenny never showed up because he and the receptionist had an impromptu wedding in Las Vegas. As Guy (Tom Everett Scott) is the only band member left, Mr. White sympathetically tells him that the band is in breach of contract, and declares them a one-hit wonder. Guy goes back to the hotel and catches up with Faye, who also hasn’t checked out yet. After talking for a while, they admit their feelings for each other and share a kiss.

In the end we learn that Guy and Faye get married and raise four children before moving to Washington, where they found a music conservatory where Guy teaches Jazz Composition. Jimmy later re-joins Playtone and records three successful albums with a band called The Heardsmen. Lenny becomes and manager at a casino in Laughlin, Nevada, however, his marriage to the receptionist fails. The bass player receives the Purple Heart for wounds he received in Vietnam while serving with the Marines, upon his return to the U.S. he becomes a building contractor in Orlando, Florida. 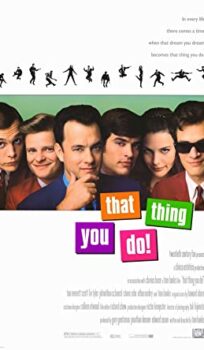