A group of 12 viking warriors, led by Buliwyf, is summoned by the king of a small northern village to battle an ancient unspeakable evil. They consult an oracle who tells them that to succeed in their mission, they must take a 13th warrior, but he can not be a norseman. Ahmed ibn Fahlad (Antonio Banderas) is an Arab traveller who has been banished from his homeland. They recruit/coerce him to go along.

They are battling the Wendol, barbaric savages who eat the dead. They are greatly outnumbered. In each clash, they lose a man or two. An ancient old lady tells them that to defeat the Wendol they need only kill the queen and chief warrior. If those two die, the others will flee in terror.

The surviving warrior sneaks into the Wendol cave lair. Buliwyf kills the queen, but is injured with a poisoned weapon. The Wendol are alerted to their presence, and they appear to be trapped deep in the cave. An underground river flows through the cave, and they realize they can hear the waterfall from where they are. They dive in the underground river, and come out through the waterfall safely.

The Wendol attack the village again. Buliwyf cuts off the chief warrior’s head. 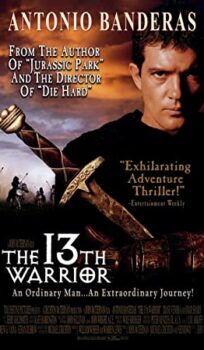