Richard Hannay is a Canadian tourist in England.  One evening, he is watching the show of Mr Memory, who can perform amazing feats of memorization.  While leaving, he is accosted by “Ms Smith”.  She claims to be a spy trying to prevent vital state secrets from being taken out of England.  She followed the enemy agents into the Mr Memory show and fears they will kill her.  She asks his help to stop these enemy agents.  He is skeptical, but lets her sleep on the couch.  She is stabbed to death.

Hannay now believes her.  She had a map to a house in Scotland, so he heads there.  Unfortunately, he discovers that this is the house of the head enemy agent.  He escapes and goes to the local police.  They do not believe anything he says, and arrest him for the murder of Ms Smith.  He jumps out a window and escapes.  He tries to hide in a political rally, but is arrested again when a young lady named Pamela exposes him.

Pamela is told she must come to the station to identify Hannay.  Hannay and Pamela are handcuffed together. Hannay realizes that these are not real police, but enemy agents posing as police.  He escapes, dragging the handcuffed Pamela along.  Pamela does not believe a word he says, and is convinced he is a killer.  They spend the night in a small hotel.  Pamela slips her hand out of the cuffs during the night.  While trying to sneak out, she overhears two of their pursuers in the lobby and realizes he has been telling the truth.  Pamela tells Hannay she trusts him, and that the men said they are going to the Palladium theater to get the man with the stolen data out of the country.

Pamela goes to the police.  They check her story, but tell her the data is safe and accounted for with no missing documents.  They think Hannay has duped her.  Hannay goes to the Palladium and finds it is the Mr Memory show again.  When Pamela tells Hannay there are no missing documents, Hannay figures out that Mr Memory has memorized the documents and then replaced them.  The spies just need to get him out of the country, and they will have the data.  The police followed Pamela and try to arrest Hannay.  Hannay yells out to Mr Memory, “What are the 39 steps?”  Mr Memory can not stop himself from answering, revealing the truth to the police. 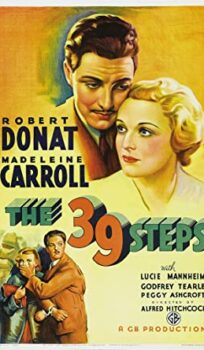