Mr. Collins (Austin Pendleton) turns out to be the one who has been terrorizing Jane (Juliette Lewis) all along, and also the killer of Jane’s aunt, the previous owner of the appartment in which she lives.  He did it because he had a thing against women.  Jane figures it out when, while at his place, she comes upon a blueprint of her appartment, similar to the one she found earlier, drawn on the ceiling of the appartment below hers -the empty one-.

He knocks her unconscious and locks her in a room containing many lit candles, and the rotting corpse of her aunt.  She wakes up and, when she manages to get out, he jumps on her, and a long struggle ensues, in which she hits him in the head with a pipe, and then, also, The Locksmith (Tobin Bell) and Greg (William Hurt) -Jean’s boyfriend- come to defend her.  Finally, she pushes him through the railing of the stairway, and he falls down to his death.

Greg quits his job as a weatherman in New York, as he and Jane move in together to a house in the suburbs.  The last scene shows The Locksmith, doing some paintings of each of the characters, with a creepy expression on his face.

NOTE: Ametra adds the following…
I have a different view of the ending than that which was submitted.  Greg was hurt/upset that Jane wouldn’t move in with him – they’d actually argued about it during the movie.  At the end when the various paintings were shown, a few of them were of Greg sitting down with Mr. Collins at what looked to be a table as they were discussing something.  That, to me, meant that Greg was in “cohoots” with Mr. Collins to scare her badly enough that she would run to Greg and move in with him as he wanted. 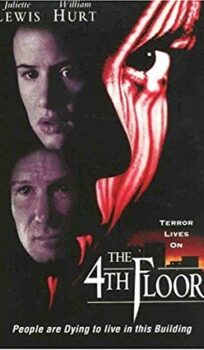