Gerard (Jeroen Krabbé) comes to convince himself that Christine (Renée Soutendijk) is, indeed, a “spider”, who taunts men to fall at her feet and eventually leads them to her doom and death; he believes that Herman (Thom Hoffman), the young handyman, was, indeed, her “4th man”, upon the unfortunate accident in which he got impaled by a steel column holder through his right eye.  Yet, the doctor who is attending him, Dr. de Vries (Dolf de Vries), and who met him at the conference earlier in the film and had known Christine for years, realizes Gerard must have lost his mind, due to his alcoholism.

Then, in comes Christine and, when he jumps on her and tries to strangle her, Dr. de Vries orders to have him sedated and moved into the Psychiatric ward for observation.  Christine goes out, heartbroken.  Then, a man with a dog comes upon her to comfort her and offers her a ride home.  On their way out, he tells her he is a surfer, and she offers to film him sometime.

It is to be noted that all three of Christine’s previous husbands died in seemingly accidental and unfortunate circumstances: one was a parachuter who fell to his death because the parachute didn’t open that particular day; the other got attacked and killed by a lion at the zoo; and the third one died in a freak accident, boating at the sea, when their bot got hit by another one.

As Christine and her new friend drive off, Maria/Ria the nurse (Geert de Jong) -also the woman in Gerard’s recurrent dream-, watches from the window and then checks up on Gerard and leaves him alone.  The camera pans to a crucifix on the wall, then the image blanks and switches to that of the spider from the opening credits, presumably moving off to its next victim.

The movie ends and the credits roll, as we are left to assume whether it was all real, or just a big delusion from Gerard. 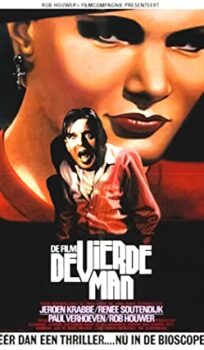