Hannibal, Face, BA Baracus, and Murdock all meet while Hannibal and Murdock are running an extraction operation in Mexico.  Following the operation, Murdock and BA join Hannibal’s team and they work together for 8 years.

While in Iraq, they agree to a CIA Operative’s (Agent Lynch) plan to reclaim US currency printing plates and counterfeit money from Iraqi forces despite General Morrison’s and Agent Sosa’s strong objections who both insist that independent firm Black Forest led by Pike should do it.  When they succeed and return to base, the general’s (the one man with knowledge of the mission) car explodes and Pike’s forces steal the plates.  Having no proof it was a sanctioned op, the men are charged with stealing the plates and wind up in prison.

Agent Lynch helps them break out to find Pike.  After disrupting Pike’s deal and stealing the plates, kidnapping an unidentified Arab “buyer” in the process, it’s revealed that Lynch, General Morrison (now disguised as the Arab), and Pike were all in cahoots but Morrison and Pike cut Lynch out of the deal.  Lynch orders an air-strike that kills General Morrison.  Ultimately Face creates a plan to ensnare Lynch (who in turn frees Pike to help him) and they face off at the docks.  Lynch is easily fooled by Face’s deceptions and tricks, but Pike uses a powerful rocket launcher to punch a hole in the A-Team’s barge.   Face fights Pike and loses, but BA Baracus rides in on a motorcycle to take Pike down.  Lynch confronts Hannibal and a hooded captive he believes to be General Morrison in a cargo container.  After subduing Hannibal, he shoots “General Morrison” only to reveal that the whole thing had been a set-up and Agent Sosa & other law enforcement were on the outside listening/watching the entire exchange.  Although Lynch is taken into custody, the CIA remands him (but thanks the A-Team for their efforts) and then Military Police show up to arrest the A-Team because they broke the law by escaping from prison (despite the crime that they were convicted for basically being dismissed).  However, Sosa slips Face a key and the group escapes.  Still wanted by the government, they now survive as Soldiers of Fortune helping those with nobody to turn to.  If you have a problem, and nobody else can help, and if you can find them, then perhaps you too can hire the A-Team. 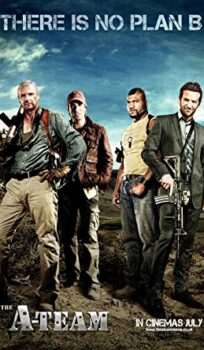