Young politician David Norris (Matt Damon) accidently discovers the existence of The Adjustment Bureau – a group of agents, whose job it is to make sure people stay on their pre-written life paths – after he walks in on them adjusting a meeting he was about to attend.  He was supposed to miss the bus and be late the meeting, but, the agent assigned to David, Harry Mitchell (Anthony Mackie) fell asleep on the bench and missed his cue.  Getting on the bus also allowed David to reconnect with ballet dancer Elise (Emily Blunt), who he had met the previous night and inspired him to give a well praised concession speech after losing his election for senate.

Lead agent Richardson (John Slattery) warns David that if he ever revealed their existence, he would have his mind erased.  Richardson also says that he was never supposed to see Elise again and he burns the card she gave him with her phone number.

Three years later, David is preparing to run for senate again, but he can’t get Elise out of his mind.  While he is riding on the bus, he sees her walking down the street and runs out of the bus to be reunited with her.  Richardson and the other agents move to re-separate the two and have David miss meeting Elise at her ballet rehearsal.   However, despite Richardson’s best attempts at slowing David down, he successfully reaches the rehearsal and Richardson is no longer allowed to have any more influence on David’s life.

The Adjustment Bureau figure out that the reason that David and Elise keep coming together is because they were in fact once destined to be together in all previous versions of their life plan, until it was changed in 2005.  It is the remnants of these previous plans that are drawing the two together.  The Bureau assigns Thompson (Terence Stamp) to resume the attempt at separating David and Elise.  Thompson convinces David that if he and Elise get together, the outcome of both their lives — David becomes president and Elise becomes a famous dancer and choreographer — would be ruined.  After Thompson causes Elise to sprain her ankle, David silently leaves her at the hospital and moves on with his life.

11 months later, David is poised to win the election, however he is no longer happy without Elise, who he finds out is about to get married to her choreographer.  Harry, who is guilt ridden, comes to David and tells him that Thompson was lying when he said David and Elise’s lives would’ve been ruined – they would have just been content with each other.   David gets Harry to help him reunite with Elise using The Adjustment Bureau’s method of travelling using portals hidden in doors.  David successfully finds Elise in the washroom of the courthouse she is getting married in and in the process of apologizing to her, he reveals the existence of the Bureau.

In danger of getting his mind erased, David gets Elise to follow him through the different portals until they end up at the Statue of Liberty, where they are trapped.  David decides to try and confront “the chairman” of The Adjustment Bureau and he and Elise re-enter the door by turning the knob in the opposite direction, which leads them to the Bureau’s headquarters.  David and Elise try to race the chairman’s office, but they are eventually trapped by Thompson on the roof of a building.  However, Harry then comes to Thompson with new instructions from the chairman.  Thompson reads the new instructions and then excuses itself.  It turns out that the chairman was so impressed with David’s determination to be with Elise that he rewrote their life plan so they can be together.  David and Elise end up happily together and Harry narrates that perhaps one day humanity as a whole will be allowed to write their own destinies. 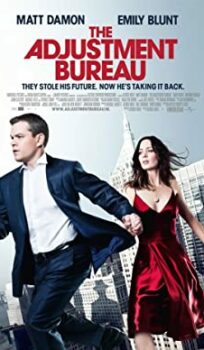