The Adventures of Ford Fairlane(1990)

Julian Grendel (Wayne Newton) is behind the plan to steal from his own company, and was responsible for the deaths of Bobby Black (Vince Neil) and Johnny Crunch (Gilbert Gottfried). He intends to frame Don Cleveland (Morris Day) as the culprit before Ford (Andrew Dice Clay), Zuzu Petals (Maddie Corman), Jazz (Lauren Holly) and Sam the Sleazebag (David Patrick Kelly) expose Julian.

Ford ultimately kills Julian after covering him with a Sambuka milkshake and flicking a cigarette at him. Lt. Amos (Ed O’Neill) arrives late but is remembered by Don as the best white performer in disco and earns a recording contract.

When Smiley (Robert Englund) emerges one last time at Ford’s burned house, Ford tricks him into laying down his gun and shoots him dead at long last. Before Smiley’s death, he admits to killing The Kid’s (Brandon Call) father and stealing the Fred Flintstone ring.

After Ford and Jazz reconcile, Ford wins the radio contest. The movie ends with Ford, Jazz, the Kid and the still-alive koala bear enjoy Ford’s new riches aboard a yacht. 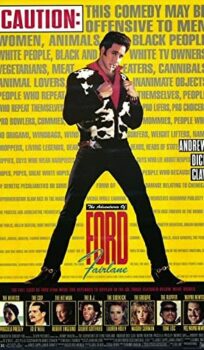