Pooper:
A battered and half-sunken Queen blows up the Louisa. Newlyweds Rose (Katharine Hepburn) and Charlie (Humphrey Bogart) survive, and are last seen kicking away, clinging to a piece of wreckage.

Long Ending:
Reverend Samuel Sayer (Robert Morley) and his sister Rose (Katharine Hepburn) are British citizens running a mission in Africa. They are isolated from the world other than the occasional mail shipment delivered by Charlie Allnutt (Humphrey Bogart). Charlie is the captain of a river boat called the African Queen and isa jack-of-all-trades. Through Charlie, they learn that World War I has broken out.

Charlie stops by as he passes the village and offers to let Rose come with him. He explains that his crew ran off once they came across soldiers and that he intends to hide out on the river until the war is over. Rose, however, wants to fight for her country (and also for revenge). She realizes they have materials on board to make torpedoes. She develops a plan whereby they will build the torpedoes, sail down to a strategic lake being held by the Germans, and ram the African Queen with its torpedoes into the war ship Luise (the ship the Germans are using to maintain naval superiority). In order to do this, they would have to make it through deadly rapids and past a German fort. Although Charlie is opposed to the plan, Rose eventually talks him into it.

At first, the pair dislike each other. Rose is repressed and Charlie is a drunk. However, after Rose dumps all the alcohol overboard, Charlie straightens up and the pair strike a friendship. Rose becomes very adept at steering the boat and navigates them through the rapids. Charlie manages to captain the ship past the fort and they survive being shot at by the Germans. As the two celebrate their success, they kiss. The romance blossoms into love.

They end up being forced to sail through a forest of aquatic trees. The river gets so narrow that the two of them need to jump into the leech-infested water and pull the boat through. Sick and exhausted, it appears that they’ll die before they get out. However, it rains that night and the river rises enough for them to boat out of the forest and into the lake where the Luise patrols. Charlie builds the torpedoes and they plan to ram the Luise at night.

A big storm breaks out on the night of their attack. As they try to attack, the African Queen is capsized by the storm and sinks. The Germans capture them. Rose proudly declares that she and Charlie tried to attack the Germans. The pair are brought on board the Luise and sentenced to death.

As a final request, Charlie asks the ship captain to marry he and Rose before they are killed. The captain marries them and both are placed in nooses. Before they are hung, the Luise sails over the submerged African Queen and the torpedoes are smashed against the Luise’s hull. The Luise is greatly damaged and sinks. In the mayhem, Rose and Charlie slip out of their nooses and escape the German forces. The film ends with the now-married couple victoriously swimming to shore. 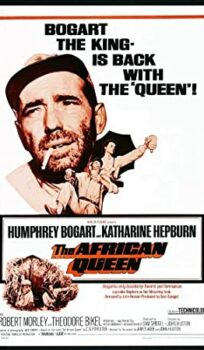