Too late, despite the warnings from Red (Jason Sudeikis), who was wary of their presence from the beginning, the rest of the inhabitants of Bird Island realize the pigs had come to steal all their eggs for food. When the pigs fool them, destroy the village and take off with all their unborn offspring, everyone comes to apologize to Red; in turn, he steps up and organizes everyone to build a boat out of debris and sail off towards Piggy Island.

When they all finally arrive, Red, Chuck (Josh Gad) and Bomb (Danny McBride) figure out the eggs have been hidden somewhere in the castle at the center of the pigs’ city; they search around until finding King “Leonard Mudbeard” (Bill Hader), congregated in front of a large crowd, getting ready to boil the eggs.

Meanwhile, all the other birds join efforts and use the gigantic slingshot given to them earlier by the pigs to catapult themselves, one by one, against the city’s walls, destroying them; that is, until Terrence (Sean Penn) tries to use the slingshot himself and breaks it, due to his massive size. Furthermore, Mighty Eagle (Peter Dinklage), having had a change of heart, arrives to help them.

Red battles Leonard to rescue the eggs; an egg falls off the net and Red, making use of his newfound control of his anger, distracts Leonard to recover it. The entire reservoir of dynamite around the castle gets accidentally ignited by a candle Leonard drops, causing a massive blast that blows up the entire city; however, both Red and Leonard are safe, thanks to the pot having collapsed and fallen on them, sheltering them both from the explosion.

The eggs are returned to their respective parents at the same time they all start hatching; the last one Red fought Leonard for also hatches, revealing three small blue birds. Mighty Eagle takes credit for rescuing the eggs, but also admits to Red, Chuck and Bomb that he just pretended to be lazy and apathetic to force them to find their inner courage.

Back at Bird Island, Red finds his house repaired by the rest of the villagers, and the newborn chickies sing to him in gratitude. He also allows Chuck and Bomb to move in with him as roommates. As the movie ends, it is revealed that all the pigs (including Leonard) survived.

The credits roll, with a massive dance-around. And a mid-credits scene shows the three blue chickies slingshooting themselves out to sea. 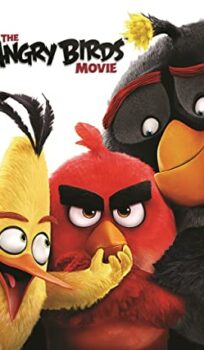