After Baxter (Jack Lemmon) is promoted due to his willingness to let his bosses use his apartment for their trysts, he begins to develop a conscience–and a real affection for self-destructive elevator operator Miss Kubelik (Shirley MacLaine). In the end, he quits rather than allow the company president Sheldrake (Fred MacMurray) arrange a New Year’s Eve rendezvous with Miss Kubelik. When Sheldrake tells her what a ‘cad’ Baxter has been by denying them a private place, she realizes that Baxter is the kind of man she really needs, and runs to be with him. The viewer is left to infer that the two will live happily ever after. 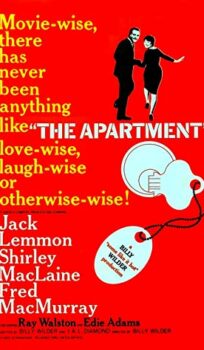