Crunch Calhoun (Kurt Russell) is the getaway guy in an ensemble of thieves.  Nicky Calhoun (Matt Dillon), Crunch’s brother, is the setup guy.  Crunch went to jail for a botched job and is now doing motorcycle daredevil shows for money.

Nicky enlists Crunch’s help for one last job.  They get the gang back together to steal a rare book.  They are able to steal the book with no problem with the master forger, Guy de Cornet (Chris Diamantopoulos), and Uncle Paddy (Kenneth Welsh), who knows everybody.  Nicky overhears a story about forging a copy ten times and selling it to make more money.  Nicky is interested in doing this with the book.  Everyone chips in money which Lola (Katheryn Winnick), Crunch’s girlfriend, holds onto.

Interpol is watching the gang closely with a bumbling Agent Bick (Jason Jones) and former art thief, Samuel Winter (Terrence Stamp).  Agent Bick is only interested in a stolen Seurat painting that Nicky has.  Samuel is only helping Interpol to shorten his sentence.

Both Crunch and Nicky double-cross each other, with Nicky losing big time.  The ‘rare’ book is a fake.  Guy was able to forge the Seurat 10 times, and Uncle Paddy sold them.  Nicky realizing he got scammed, runs to get his Seurat painting, where he is promptly arrested.  Samuel was coached prior to saying that the Seurat was real even though it was fake.  Upon release, Samuel is given a package, we assume it is the real Seurat painting.

The gang-less Nicky is waiting for Lola with the money.  Francie (Jay Baruchel), Crunch’s apprentice, is just finding out the nitty gritty details now.  Crunch said that he can’t keep a secret and this was evident at the border crossing.  Lola shows up with the money and new motorcycles.

They all go their separate ways.

Stay or fast forward for some outtakes during the credits.

At the end of the credits, there is an alternative take for the ice cream truck guy. 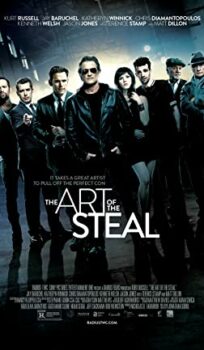