Doc (Sam Jaffe) has just been released from prison and has a plan for a jewel heist. He gets a lawyer to finance it but the lawyer is broke and the lawyer’s P.I. comes up with an idea for a double cross….

The bookie who was a go-between and actually financed it squeals after being identified for seeing Doc on the day of his release, which causes…. 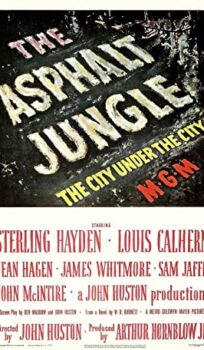