SHORT VERSION:
After Laurel gets fed up with her fake Cutty persona, she – with Sally’s help – sets up a situation where it looks like he died in a car explosion. However, this backfires badly when she and Sally later get arrested on suspicion of “murdering” him. Frank – who had already figured out that Laurel was Cutty – decides to take advantage of this incident by making himself Cutty’s front man, which he achieves by doctoring a picture of himself with Laurel in her Cutty makeup holding a newspaper talking about Cutty’s “death”, then claiming to the media that Cutty was carjacked and the thief was blown up in the car by enemies of his own. Laurel and Sally are thus released, but Laurel’s license is suspended, and Manchester Investments (the company Frank works for) makes preparations to merge with Laurel’s and Cutty’s company.

A depressed Laurel shuts herself in her apartment for days until Sally manages to break in and force her to pull herself together. Sally later informs Laurel that the Peabody Gentlemen’s Club is inducting Cutty into their ranks at an upcoming banquet and giving him a Businessman of the Year award, which Frank will likely accept on his behalf. Sally tells Laurel that, as long as Frank has Cutty, he has her, and these words inspire Laurel to don the Cutty getup again and attend the banquet so she can both rid herself of Cutty and take down Frank. As Frank is about to accept Cutty’s award, Laurel appears in her full disguise, and as she makes her speech, she suddenly kisses Frank, then slowly sheds her disguise to reveal herself. Laurel finishes her speech by addressing the evils of exclusivity, like racism and sexual discrimination, and she gets applauded by everyone there (though most of the rich white club members are likely doing it to save face in front of the press covering the event). Laurel then takes the award and leaves.

Laurel starts up another investment company with Sally, which becomes very successful. A newly-unemployed Frank appeals to Sally for a job there, but she happily rejects him.


LONG VERSION:
Laurel (Whoopi Goldberg) eventually becomes tired of her fictitious business partner Robert Cutty when he gets sole credit in the media for all of her ideas, and tabloid journalists and competing firms are increasingly willing to do anything to bring him into the public and on their side. One night, Frank (Tim Daly) meets with the tabloid columnist Cindy Mason (Lainie Kazan) and her photographer Eddie (Brian Tarantina) and they all concoct a plan to flush out the elusive Cutty: Frank contacts Agent Tompkins (Zeljko Ivanek) of the Securities and Exchange Commission (S.E.C.) and asks him to serve up Cutty with a judicial subpoena since he profited personally from the stock of Syntonex (a high-tech computer company owned by Aesop Franklin [Austin Pendleton] that, through Laurel’s wisdom under the Cutty persona, has stayed in business), and Cindy will have Eddie spy on Laurel around the clock to catch her doing anything that can be used against her and Cutty.

After Tompkins gives Laurel the subpoena since Cutty is unavailable, he warns that, if Cutty doesn’t cooperate, the S.E.C. will have to conduct a full-scale investigation. Laurel later has a chat with Sally (Dianne Wiest) – the only person she let in on the secret about Cutty – about this, and she tells Sally that she will have to try to disguise herself as Cutty with the help of her drag queen friend Charlie (Kenny Kerr), ruling out the idea of telling the truth because it will get her jailed for fraud. Charlie gives her a latex mask, wig, and bodysuit that makes her look like a white Marlon Brando-looking male, but he tells her to try it out in a public setting first before she meets with the S.E.C. so she can get some practice in. To that end, she decides to book a night at the Plaza Hotel as Cutty, but the experiment becomes fraught with trouble thanks to Frank, Cindy, and the businessman Fallon (Eli Wallach) all trying to speak with her, in addition to her having to fend off the amorous advances of Fallon’s secretary Camille (Bebe Neuwirth). She returns home and takes off her disguise and says that Cutty is going to “die”, having had enough of him and knowing that he can’t show up in front of the S.E.C. if he is dead. However, she doesn’t know that Cindy followed her as Cutty back to her apartment, and the next morning, she and Eddie meet with Frank again and chat with him over the results of their surveillance. Frank quietly deduces that Laurel and Cutty are one and the same, but he doesn’t share this conclusion with Cindy or Eddie and leaves them.

That same morning, Laurel tells Sally that she needs to kill Cutty. On that night and one failed attempt later, they stage an explosive car crash using a display skeleton to stand in for Cutty, and the newspapers report of his “death”. However, the plan winds up backfiring badly when Laurel is arrested the following night on suspicion of “murdering” Cutty. When she is interrogated, Laurel gives the cops the whole truth about Cutty being a fictional person and why she got rid of him, but she phrases it in a way that comes across like she killed him for real. Upon realizing her error, she tells them to go get Sally because she assisted her, but Sally winds up getting thrown into a holding cell next to her for being her accomplice. Meanwhile, Frank decides to take advantage of this incident by making himself Cutty’s frontman, so he doctors a photo of him standing next to Laurel in her Cutty getup with her holding one of the newspapers talking about Cutty’s “death”, then puts it out to the media. He then spins a story about how Cutty called him after all of the commotion back at the Plaza Hotel to reschedule the meeting he claims he was going to have with him that night, but while Cutty was on his way to that rescheduled meeting, he was robbed and then carjacked, and the thief must have had enemies and they blew up the car with him in it. He lastly claims that Cutty has left New York for the time being due to having been quite shaken by the experience. The charges against Laurel and Sally are dropped, but as Laurel is leaving her cell, her arresting officer shows her a copy of the falsified picture and tells her that Frank signed a sworn affidavit saying that Cutty is alive and well and on vacation in France. The S.E.C. suspends Laurel’s license and she shuts herself in her apartment for days, cutting off all contact with everyone, and in a news report that we see on her TV screen, we find out that Manchester Investments (the company Frank works for) will be merging with Cutty/Ayres Investments, and Frank has been named its president.

One day, as Laurel is watching Camille make an appearance on a talk show claiming that she is pregnant with Cutty’s child, her landlord breaks Sally into her home so Sally can speak to her. She forces Laurel to stop wallowing in self-pity and go light a candle for her deceased father like she usually does every Christmas Eve, since she wasn’t able to do that due to her arrest. After Laurel gets out and does it, Sally asks her what she is going to do next, but Laurel feels that she doesn’t have a leg to stand on. Sally then informs her that the Peabody Gentlemen’s Club plans to induct Cutty into their ranks at a banquet they’re putting on for him as also plans to give him a Businessman of the Year award, and Frank will undoubtedly collect it on Cutty’s behalf. Sally lets her know that, as long as Frank has Cutty, he has her, and she correctly interprets this as a need to dress up as Cutty again, go to the banquet, and finally rid herself of Cutty forever while also taking down Frank.

At the banquet, Laurel sneaks in unnoticed with her Cutty getup on while Sally and Charlie wait with the female reporters and journalists watching the male press members’ camera feeds in the lobby, along with Aesop, Cindy, and Camille. Frank announces to the assembly that Cutty is unable to attend and he will be accepting the award on his behalf, but then the disguised Laurel suddenly appears. As she is making her speech, she suddenly kisses Frank, then slowly sheds her disguise and reveals her true identity, much to the surprise of everyone (especially to Camille, who faints). During this and afterward, she finishes her speech by addressing the evils of exclusivity, specifically racism and sexual discrimination. The black guys in the room working as busboys and waiters applaud her first, then the white businessmen join in (minus Frank and his boss Manchester [George Martin]), most of them likely doing it to save face in front of the press. Laurel then takes the award and leaves the club with Sally, Charlie, and Aesop, being applauded by the female press members on her way out.

Laurel opens up another investment company with Sally that becomes very successful, and we see a newly-unemployed Frank trying to appeal to Sally for an executive job there, but she happily rejects him. 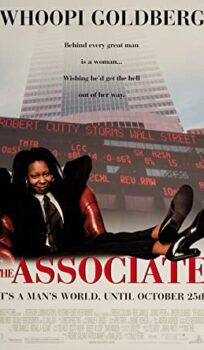