The Astounding She Monster(1957)

Two thugs kidnap a rich young lady, and take her to what they think is an abandoned desolate building.  The building is a geological research station, and there is a scientist there.  A glowing object crashes into the woods.  An alien emerges.  She looks like a beautiful lady in a skin tight metal suit, although she glows.  She continually pursues the group.  First one thug, and then the other thug, attack her and drop dead.  She is radioactive and they are killed by radioactive poisoning.

The scientist combines chemicals to make an explosive.  He kills the alien.  The kidnapped lady realizes she has a note, written in English.  The note states that she is a messenger from an advanced intergalactic civilization, that has been monitoring earth.  The scientist speculates that they may seek revenge for killing their emissary, as the screen fades to black. 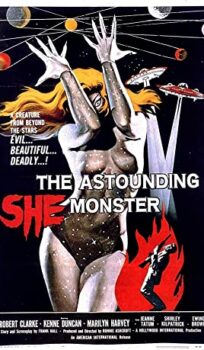