Pooper:
The coroners realize Jane is a witch and try to bargain with her. She kills both of them anyways. The police then transport Jane to another medical hospital (where the cycle of death will likely start again).

Long Ending:
Small-town Virginia police are walking through a horrible crime scene. They find the family living in the house where the crime occurred having been killed in brutal ways. They also discover an unknown corpse, a Jane Doe (Olwen Kelly), in the basement. A deputy notes that there was no sign of forced entry and, in fact, it looked like the family was trying to escape from the house. The sheriff brings Jane Doe’s body to the local morgue for an emergency autopsy.

The morgue is part of a funeral home run by the Tilden family. This includes father Tommy Tilden (Brian Cox) and his son Austin Tilden (Emile Hirsch) who Tommy is training for the family business. Tommy’s wife/Austin’s mother passed away a couple years ago and the pair have largely suppressed their grief over it. Austin doesn’t want to go into the family business and has plans to move away with his girlfriend Emma (Ophelia Lovibond), but has not told his father. When Jane Doe is brought to them by the police, Austin blows off a date with Emma to help his dad (but asks Emma to swing by later that night).

The autopsy begins and things do not add up. Though Jane’s eyes are clouded like she has been dead for weeks, there is no rigor mortis. They find her wrists and ankles have been shattered from restraints and her tongue has been cut out. Though her internal organs show signs of intense trauma, including signs of her being burned and stabbed multiple times, her skin is pristine and shows no sign of trauma whatsoever. They find that she has been poisoned and also forced to swallow a cloth with old fashioned writing on it. During the autopsy, creepy things happen. The radio plays songs about the devil, Austin sees shadowy specters, their cat is fatally attacked by an unseen force, and a massive thunderstorm cuts out the electricity (requiring the generator to kick in).

When the pair remove Jane Doe’s skin, they find the inside of her skin to be covered in satanic tattoos. At that point, all hell breaks loose. The pair are suddenly attacked by the corpses in the morgue, with Tommy suffering the brunt of the damage. They eventually try to burn Jane’s body, but the body seems impervious to damage (with only her internal organs suffering the injuries inflicted upon her). The pair find that a tree has landed on the emergency exit hatch and the elevator is useless due to the storm cutting off the electricity. Tommy attacks one of the “corpses” with an axe, only to discover that the corpse was actually Emma (who had returned for her date with Austin)and Jane had altered their perception of who was walking towards them. While hiding, father and son have a heart to heart regarding the death of Tommy’s wife/Austin’s mom, and then decide to finish the autopsy (believing it is the only way to break the curse).

After removing Jane’s skull and taking some brain tissue, the pair discover that Jane’s brain is still alive. Austin manages to decipher the cloth found inside Jane Doe, and the cloth suggests that Jane was alive in Salem, Massachusetts at the time of the infamous witch hunts (where innocent women accused of being witches were burned at the stake). Tommy theorizes that Jane was an innocent woman who was wrongfully tortured and killed by the Salem witch-hunters and, in so doing, essentially turned her in to a witch that takes vengeance on all who have tortured her. Intuiting that their autopsy has been construed as a form of torture by Jane, Tommy offers to take on all her injuries if Jane will only spare Austin’s wife. Jane appears to accept, as Tommy’s limbs are shattered, and he suffers cuts and a scalping similar to what they did to Jane’s body before Austin mercy-kills his father.

As soon as Tommy is killed, Austin ears the sheriff calling for him outside the emergency doors. Austin walks up the stairs to the voice, but then realizes that this is another trick by Jane when the Sheriff begins singing songs about the devil. Before Austin can do anything, a corpse from the morgue jumps out at him. Austin falls backwards in surprise and tumbles off the stairwell to his death. The corpse of Jane, having fully healed its exterior, seems to smile.

Eventually the actual sheriff shows up and witnesses the carnage (the radio also notes it had been a clear night, suggesting that the storm was another illusion from Jane). Surveying the carnage, the sheriff orders Jane Doe’s corpse removed from his jurisdiction. As Jane is transported to a new morgue, her toe taps in time to the devil-themed music playing from the radio. 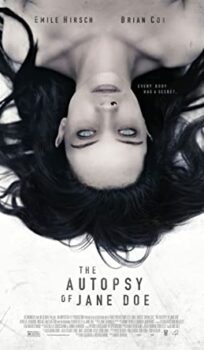