The Bad Guys are a gang of thieving criminals, made up of charismatic leader Mr. Wolf, grumpy safecracker Mr. Snake, hacker Ms. Tarantula, master of disguise Mr. Shark, and hot-headed Mr. Piranha. They act as villains since the rest of the world sees them as scary predators. After a failed heist, Wolf convinces Governor Diane Foxington to go along with an experiment from guinea pig philanthropist Professor Marmalade to rehabilitate them to become model citizens, though this is just a ruse so that the gang can pull off their heist and retreat from the city.

Wolf genuinely wants to be seen as good and also enjoys doing good deeds. During the second heist, he has a change of heart and aborts the plan, only for a rare meteorite to be stolen from the gala where the heist was supposed to take place. Turns out Marmalade is the real villain, as he planned all along to use the Bad Guys as pawns in his scheme so that he can use the power from the meteorite to control an army of guinea pigs to pull off his own heist. Diane frees the Bad Guys from prison, as she used to be the notorious burglar, Crimson Paw, but the rest of the Bad Guys turn their backs on Wolf since they think he was always going to cut them loose after going good.

As Marmalade sets his plan in motion, Wolf and Diane go off to stop him but are captured. Snake also appears to join Marmalade, but Shark, Tarantula, and Piranha also realize they like doing good deeds, so they rescue Wolf and Diane and help them foil Marmalade’s scheme. They go off to get Snake, who gets dropped from a chopper by Marmalade, but Wolf and his friends rescue Snake. They willingly turn themselves in to the police, but Marmalade is further humiliated when he realizes the meteorite he took was a lamp switched out by Snake, and the real one is destroyed inside his home. Furthermore, he is accused of being the Crimson Paw and is arrested.

One year later, the Bad Guys are released from prison and are now joined by Diane. 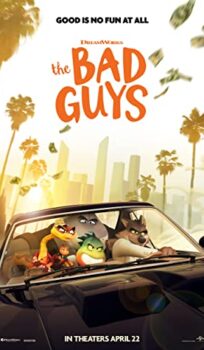