POOPER:
The Bears make it to the championship game, but lose by one run.  Despite losing, the team knows they came a long way and feel like they are the winners and celebrate on the field with non-alcoholic beer.

LONG VERSION:
Los Angeles councilman Bob Whitewood sues a local Little League for excluding his son Toby from playing.  As part of the deal to drop the suit, the league agrees to add a team (the Bears) to the league that will include Toby and other players who were also not allowed to join.  These players are either unskilled or are a minority.  With no time to be involved with the Bears, Whitewood pays local swimming pool cleaner and former minor league pitcher (and alcoholic) Morris Buttermaker (Walter Matthau) to be the manager.  In this ultra-competitive league, Buttermaker realizes that his team of misfits is no match for the rest of the league.  This becomes obvious after an embarrassing 26-0 loss on opening day.  After hearing of the loss, Whitewood realizes that by adding this team, he has set Toby and the other kids up for failure and wants the team disbanded.  The players all want to quit as well, but Buttermaker won’t hear of it and tells everyone the Bears will keep playing.  However, the Bears lose their next game 18-0.

Knowing that he needs to find better players to be competitive, Buttermaker approaches Amanda Whurlizer (Tatum O’Neal), the 12-year-old daughter of his ex-girlfriend.  Amanda was taught how to pitch by Buttermaker when he was dating her mother, but lost interest when they broke up.  She joins the team when Buttermaker agrees to her demands of paying for ballet lessons and buying imported jeans for her.  When Amanda pitches, the games are closer, but the Bears still can’t hit and are still losing.  With Amanda’s help, Buttermaker recruits Kelly Leak (Jackie Earle Haley), the area’s best athlete but also the biggest troublemaker.  In his first game with the Bears, Kelly hits a home run (the first run the Bears have scored all season) and they win.

Thanks to Amanda’s pitching and Kelly’s hitting, the Bears are playing better and are now winning their games.  Eventually, the Bears make it all the way to championship game against the Yankees, coached by the extremely competitive Roy Turner (Vic Morrow).  In that game, the tension between the teams is intense, as Buttermaker and Turner are yelling at each other and ordering their teams to play hard.  But an incident between Turner and his son changes the dynamic of the game.  The incident began when the Yankees pitcher (Turner’s son) threw at the head of Bears batter Mike Engelberg after being told to intentionally walk him.  Turner rushes to the mound and strikes his son for not doing what he was told.  On the next pitch, Engelberg hits the ball back to the pitcher, but refuses to throw it to first to record the out.  Engelberg rounds the bases for an inside-the-park home run.  After the play, Turner’s son walks off the field, drops the ball at his father’s feet, and quits the team.

As a result of that play, Buttermaker realizes that he is turning into the type of coach he most despises, and puts in all of his back-up players.  Councilman Whitewood, attending his first game of the season, wants to know why he is throwing away the championship.  He tells the councilman that this game is for all the players to have fun, and to go sit down.  The Yankees take advantage of not having to face Amanda by building a big lead.  The Bears come back in the last inning, but lose by one run after Kelly is tagged out at the plate for the final out of the game.  Even though the Yankees won the championship, the Bears knew they came a long way and feel like they are the winners and celebrate on the field.  Buttermaker, who drank beer in the dugout during every game, gives his players non-alcoholic beer and they spray it all over each other.  The movie ends with the Yankees telling the Bears they are still bad, but played with guts.  The Bears tell the Yankees where to stick the trophy and to wait until next year. 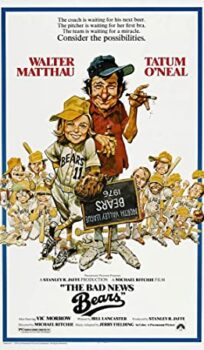