POOPER:
Cable kills Taggart, but shows mercy on Bowen.  Hildy returns from San Francisco, and Cable agrees to go with her to New Orleans.  As he is preparing to leave, he is run over by her car and later dies of his injuries.

LONG VERSION:
Set in the early years of the 20th century, Cable Hogue (Jason Robards) is a prospector who is abandoned in the desert by his partners Taggart and Bowen without water.  He has a chance to kill them, but he is hesitant to do so.  He does vow revenge on them as they ride away.  As Cable is wandering through the desert, he makes a bargain to God.  If He lets him find water, he will change his life for the better.  No sooner does he make that prayer that Cable stumbles upon a muddy pit.  He digs there and finds a previously unknown spring.  Cable discovers that the spring is on a stagecoach route halfway between two distant towns.  Cable decides to stay at the spring and turn it into a stagecoach station.  Cable’s first paying customer is Rev. Joshua Sloane (David Warner), a traveling preacher who stays to help Cable set up the station.

Cable goes into town to purchase the land around the spring, and despite nobody believing his claim of water in the desert, he is able to buy 2 acres.  After getting a bank loan, he treats himself to a bath and the company of local prostitute Hildy (Stella Stevens), and they fall for each other.  Now back at the spring, Cable and Joshua set up the area and dub it Cable Springs, and it soon becomes a stopping point for the stagecoach.  With the business now booming, Joshua tells Cable that he must leave to continue his calling of preaching the Word of God, but will be in the nearby town.  Shortly thereafter, Hildy arrives at Cable Springs after the townspeople tell her to leave.  She plans on moving to San Francisco and marry a rich man.  She also tells him that she only plans on staying for the night, but decides to stay longer.  The two are in love with each other, but Hildy insists on going to San Francisco.  As she is leaving, Cable promises to find her there one day.

Several years pass, and the business, still run by Cable, continues to prosper.  One day the stagecoach pulls into the station, and two of the passengers who come out are Taggart and Bowen.  Cable hasn’t forgotten what they did to him and, pretending that he has let bygones be bygones, asks that they return.  He even tells them that he has a lot of money there, knowing they will try to rob him.  The next day, they do return to get Cable’s money.  They find the station empty and think he fled, but Cable is actually laying in wait for them.  Taggart, thinking Cable still won’t shoot them, goes for his gun, but is shot and killed by Cable.  He does show mercy on Bowen, who is pleading for his life.  Just then, an automobile drives by.  Realizing that the need for a stagecoach station is nearing an end, he decides to give the business to Bowen and go to San Francisco to find Hildy.

The next day, Cable is preparing to leave Cable Springs when another automobile pulls up, and it’s Hildy.  She tells Cable that she is rich now, having married a wealthy man years ago and had recently died.  She was moving to New Orleans and came by to see if Cable will come with her, and he says yes.  When he is loading his possessions into her car, he accidentally trips the handbrake and his run over by it after pushing Bowen out of the way.  Joshua is summoned and is asked by Cable to give him a funeral sermon.  As he is giving it, Cable dies of his injuries.  The movie ends with his burial and everyone driving away from the abandoned Cable Springs. 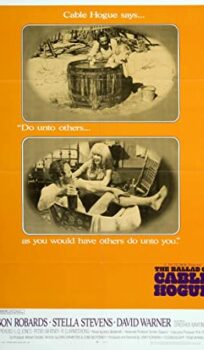