Pooper:
The Egyptian band and the Israelis help or find comfort in each other in various ways and gain an appreciation for each other before the Egyptians leave to perform at their actual destination.

Long Ending:
The Alexandria Ceremonial Police Orchestra, a band comprised of Arabs from Egypt, journeys to Israel in order to perform at the opening of an Arabic Cultural Center. They are led by the band’s stern and very formal leader, Tawfiq Zacharya (Sasson Gabai). Tawfiq mispronounces the name of the City where they are supposed to perform and the band ends up travelling to a nearly-deserted outpost named Bet Hatikvah.  Because the City is so far out of the way, another bus to take them to their actual destination will not arrive until the next day. The band meets the owner of a restaurant, a woman named Dina (Ronit Elkabetz), who convinces several of the townsfolk to host the band members overnight.

Dina herself hosts Tawfiq and the youngest member of the band, Haled (Saleh Bakri). She is clearly not at all intimidated or upset by the Arabs’ presence. She asks the pair out for a night on the town. Haled declines, but he convinces Tawfiq to accept (using it as an opportunity to escape from Tawfiq’s constant supervision). Dina and Tawfiq go out to a restaurant and begin to bond. Tawfiq relaxes and is clearly charmed by Dina’s independence, while Dina appreciates Tawfiq’s passion for music. When Dina asks Tawfiq about his wife and child, Tawfiq becomes sullen and asks to return to her apartment.

Meanwhile, Haled leaves the apartment and bumps into Papi (Shlomi Avraham), a young Israeli man he met earlier at Dina’s restaurant. Papi agrees to take Haled out, but aware that Haled is far more attractive and confident, Papi makes Haled promise not to steal the blind date he is meeting. Papi and Haled go to a roller-disco where Papi meets his blind date. Papi is utterly incompetent, refusing to dance with the girl and eventually making her cry. He confesses to Haled that he has extreme anxiety when talking to women. Haled takes Papi under his wing and coaches him how to approach his date, and Papi eventually gets a kiss.

The band’s second-in-command, Simon (Khalifa Natour) stays with several band-members at Itzik’s (Rubi Moskovitz’s) house. Simon is timid and Tawfiq never permits him to conduct the band despite his great desire to do so. Simon has also been writing a concerto for clarinet (his instrument), though he has never finished it. Simon also does not seem to display much confidence in his playing. It is revealed that Itzik is similarly timid, having been unemployed for a year, experiencing discord with his wife, and being dominated by his parents. Itzik and Simon look in on Itzik’s baby and Simon ponders that there simply may be no ending to Simon’s concerto and that the concerto just ends in loneliness. Itzik leaves the room and Simon pulls the lever on a musical baby toy and smiles, possibly finding the end of his concerto in this child’s room (the child representing hope and the future).

Tawfiq and Dina return home where Tawfiq confesses that his only son committed suicide, in part, because Tawfiq was too domineering. His wife passed away soon after from grief. Dina  remembers as a child when all Israelis would watch Arab movies and dream of romancing Arab movie stars and hopes it can be like that again someday. Tawfiq says that he is glad to have met Dina. Haled returns from his night out with Papi and plays a jazz song by his idol, Chet Baker. The normally dismissive Tawfiq actually praises Haled’s talent (although still utters a minor criticism). Dina invites Tawfiq to stay up and drink with her, but he declines and goes to bed. Later, Tawfiq awakens in the middle of the night and hears Dina having sex with Haled.

The next morning, the Band gathers to leave the Town. Tawfiq thanks Dina for everything and the band gives her a heartfelt wave goodbye. They board the correct bus arrive in the proper city where they perform a concert outside the Arab Cultural Center. 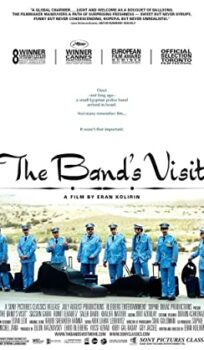