The Banshees of Inisherin(2022)

On the island of Inisherin in 1923 during the Irish Civil War, longtime best friends Padraic Suilleabhain (Colin Farrell) and Colm Doherty (Brendan Gleeson) have a falling out when Colm decides he doesn’t want to be friends anymore because he finds Padraic to be too dull. Despite Padraic’s efforts to mend fences, along with help from his sister Siobhan and local boy Dominic, Colm insists he is done with Padraic. When Padraic becomes too persistent, Colm issues an ultimatum – if Padraic doesn’t stop bothering him, Colm will sever his own fingers and deliver them to Padraic.

Colm follows through on his threats when Padraic continues to pester him. Padraic also gets into it with local policeman Peadar, who is Dominic’s father that abuses him. Siobhan leaves Inisherin after feeling stuck there, and Padraic is left alone when his beloved donkey Jenny chokes and dies after trying to eat one of Colm’s fingers. In retaliation, Padraic sets fire to Colm’s house but rescues his dog, and Colm also leaves the house before he perishes. Dominic’s body is also found in the water, though it is unclear if he slipped or committed suicide.

Padraic and Colm continue to hold animosity for one another and remain with their grudge, but Colm thanks Padraic for taking care of his dog. 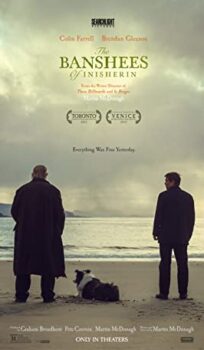