Pooper:
Elena is the only person to escape the Bar alive. It appears the government successfully covers up their murder of the people in the bar.

Long Ending:
The film follows a bunch of characters as they eventually make their way into a small bar. Unexpectedly, when one of the patrons leaves the bar, he is shot in the head by an unseen sniper. The people outside scream and flee the scene. When a second patron goes out to help, he too is shot in the head. The remaining people in the bar are an upper class woman named Elena (Blanca Suárez), an ex-cop named Andrés (Joaquín Climent), a shady salesman named Sergio (Alejandro Awada), a homeless man named Israel (Jaime Ordonez), an older woman named Trini (Carmen Machi), a low-level advertising employee named Nacho (Mario Casas), bar owner Amparo (Terele Pávez), and her cook/bartender Sátur (Secun de la Rosa).

The people in the bar initially accuse each other of creating the situation. But after masked men dispose of the bodies on the sidewalk set a fire to obscure the bar from public view, they begin to think that they are the targets of a government assault. They here a noise from the bathroom and remember that earlier, a man in military fatigues had run in off the street and into the bathroom. The man exits the bathroom – bloated and foaming from the mouth. The man dies soon after, with his last words being “don’t touch me.”

They look through the man’s pictures and discover that he worked for the military in Africa. They deduce that he must have caught a virus and brought it back to Spain with him. They realize that the government is quarantining the bar and that’s why they shot anyone who left. Andrés, the only person with a gun, forces everyone who touched the military man’s body to go into the bar’s cellar. Thus, Israel, Elena, Trini, Nacho, and Sátur are all forced downstairs.

The people in the cellar suddenly hear gunshots above them. They realize Andrés is in a gunfight with the police. Once there is silence, the police burn the inside of the bar. After the fire goes out, the people in the cellar journey topside and find that Andrés, Sergio, and Amparo were killed and then burned in the fire. They realize the government will kill them if they find out they are alive and hiding in the cellar. They also find some vials of medicine the military man had, as well as his cell phone.

Reading through the texts on the military man’s cell phone, they find the military man was carrying medicine to cure the virus on him (but he was already too sick for it to help him). There are four vials left, but five survivors. As they argue as to what to do (with some suggesting they draw lots, and others saying they split the dosages five ways), Israel grabs the gun and the vials and injects himself with one of the doses (saying that he knew they wouldn’t give him a dose since he is a poor homeless man). A struggle ensues in which the remaining vials fall into the sewer.

Elena is the only one skinny enough to fit through the sewage drain and she goes in and finds the remaining vials. She tells them she will not hand them back up (afraid the others topside will just use the remaining antidotes) and so they start breaking a hole in the cellar floor to access the sewer system (Elena says they will split the vials when they all get into the sewer). After walking around, she sees through the sewer grates that the bar is surrounded by cops who are setting charges to destroy the entire bar.

The group finally break into the sewers and Nacho manages to get the gun after seemingly killing Israel in a fight. When Sátur falls into the sewage water, Trini tries to drown him until she is caught in the act by Nacho and Elena (thinking if Sátur dies, there are enough antidotes left for the rest of them). Fully shamed by her actions, Trini takes the gun and kills herself so that the other three can use the full doses. Before they can inject themselves, Israel returns and attacks them. He kills Sátur. The other two flee and start climbing up to a manhole cover that is beyond the police cordon. Israel catches up to them and grabs on to Nacho’s leg. Sacrificing himself, Nacho leaps off the ladder (pulling Israel with him) and they both die in the fall.

Elena manages to get out through the manhole and inject herself with the antidote. As she stumbles through the City streets, we hear a news report saying that the bar has imploded with no survivors remaining (suggesting the government has successfully covered up their actions). 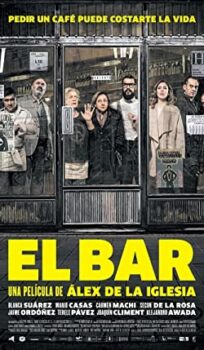