Captain Finlander (Richard Widmark) is talking casually to reporter Ben Munceford (Sidney Poitier) about what he will do to counter the supposedly cornered Russianï¿½s next possible move. He simply states, “If he fires one, Iï¿½ll fire one.” Hearing that, Ensign Ralston (James MacArthur) who is on a hair trigger and is standing with his hand over the ASROC Fire Controls, shouts “Fire One!” and hits the button, thus launching the missile. The Soviet Sub Commander, who is now doomed, reacts to that attack and fires a nuclear torpedo spread in retaliation. The credits roll as the mushroom cloud blossoms. 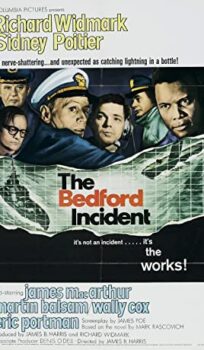