The Best Little Whorehouse in Texas(1982)

POOPER:
The Governor orders the Chicken Ranch closed.  Ed Earl and Mona get married and he gets elected to the state legislature.

LONG VERSION:
The Chicken Ranch is a popular whorehouse based near Gilbert, Texas that’s been in operation for over 100 years.  The place got it’s name because they took poultry as payment during the Great Depression.  The current house madam is Miss Mona (Dolly Parton), and she is in a relationship with local sheriff Ed Earl Dodd (Burt Reynolds).  They have an agreement that he won’t interfere with the business if they stay out of trouble.  Since the Chicken Ranch has been helpful to the town of Gilbert and it’s businesses, most of the townspeople are in favor of keeping it open.

One day, Houston TV personality Melvin P. Thorpe (Dom DeLuise) announces he is going to do an expose on the Chicken Ranch.  When he and his television crew arrive in Gilbert, Ed Earl has a profanity-laced tirade and throws them out of town.  Since the tirade was broadcast all over Texas, everyone begins to have negative opinions about the Chicken Ranch.  Due to the publicity, Ed Earl convinces Mona to temporarily close the Chicken Ranch for two months until the attention blows over.  She agrees, then remembers that the annual Texas-Texas A&M football game is the next day.  Per tradition, the seniors on the winning team celebrate the victory at the Chicken Ranch.  Mona decides to allow the party, then close the next day.

On the night of the party, Melvin and his crew ambush the Chicken Ranch, catching the students with the ladies of the house, as well as a state senator.  Ed Earl is furious at Mona for not keeping her word, and they break up.  Knowing that this ambush will spell the end of the Chicken Ranch and prosperity in Gilbert, Ed Earl decides to go to Austin to talk to the Governor of Texas (Charles Durning) and try to convince him to allow the Chicken Ranch to stay open.  The governor is initially swayed by Ed Earl, but the latest poll shows 42% of Texans want it closed, with 21% having no opinion.  That’s good enough for the governor, so he orders Ed Earl to close the Chicken Ranch.  On the floor of the state capital building, Melvin is celebrating his victory.  As Ed Earl is walking out, he hears Melvin say that he wished he could see the sheriff’s face now.  Melvin turns around and sees Ed Earl in front of him, and gets knocked out with one punch.  Back in Gilbert, Ed Earl calls Mona and gives her the bad news.

The next day, the ladies are packing their belongings and saying their goodbyes.  They are sad that Ed Earl couldn’t talk the governor into keeping the place open, which shocks Mona.  She didn’t know that he had done that, and thought it was his idea to close the Chicken Ranch.  With the ladies having gone their separate ways, and the house boarded up, Mona packs her things and prepares to leave.  Ed Earl drives up and puts her suitcases in his truck.  They make up, and he then proposes to her, and she says yes.  The movie concludes with Deputy Fred (Jim Nabors), who had been narrating throughout the movie, saying that he is now Sheriff Fred after Ed Earl got elected to the state legislature, something he had been talking about doing earlier in the movie. 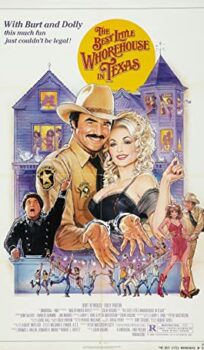