The Best Years of our Lives
Academy Awards – BEST PICTURE – 1946

Homer Parrish (Harold Russell, a real-life vet who lost both arms) who lost both his arms finally lets his fiance Wilma (Cathy O’Donnell) see him without his prosthetics as he gets ready for bed. He had been a high school football hero, but was pulling away from fiance and his family because he was disfigured. Wilma helps him without flinching, tells him she still loves him as much as ever, and they get married.

Al Stephenson (Fredric March) goes back to work at the bank and eventually is able to figure out ways to help vets more. His wife Milly (Myrna Loy) who ran the home in his absence, retains her independence, they come to a new marital understanding and happiness.

Fred Derry (Dana Andrews) who was an Air Force captain, had to go back to work as a soda jerk but quits and finds a better job, and he eventually divorces Marie (Virginia Mayo), his floozy wife who only loved the snazzy uniform, and marries Al’s daughter Peggy (Teresa Wright).

Thanks Joy Z… who adds the following commentary:
My favorite scene is where Dana Andrews goes to a field where the mothballed fighter planes are now kept, and climbs into the cockpit of one, and relives the sounds and images of a wartime mission.

I heard a quote once by William Wyler, the director, that this was the most important film he ever made. He wanted to show the folks at home how the war didn’t end when the troops came home.) 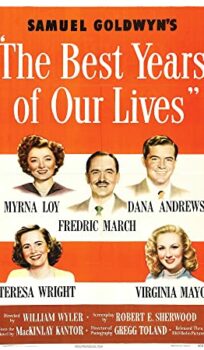