The BFG (Mark Rylance) while taking Sophie (Ruby Barnhill) out on his dream blowing duties, he discovers that he dropped her blanked in giant country and that the other giants are aware of Sophie’s presence in their land. Realizing that Sophie is no longer safe with him, he returns her to the orphanage, revealing that he had another human boy as a companion until he was found and eaten by the other giants. Sophie convinces him to take her back to giant country when she tries to jump off the orphanage balcony.

The other giants search the BFG’s lair for Sophie before they are driven out by the BFG who finally takes Sophie’s advice to stand up to them. During the chaos, Sophie finds the home of the human boy, all the illustrations of himself and the BFG, and a portrait of the Queen of England. Inspired, Sophie convinces the BFG to create a dream about the man-eating giants, the BFG, and Sophie herself to give to the Queen of England. The next morning, the queen awakens from the nightmare and the maid Mary finds Sophie on the windowstill, exactly as the queen dreamed of. Sophie coaxes the reluctant BFG to reveal himself, proving her story true.

The giants are imprisoned on an uninhabited island. The helicopters drop Snozzcumbers and crates of snozzcumber seeds as the only food they’ll be eating from now on. Sophie is adopted by Mary and Mr. Tibbs, the queen’s butler. The BFG starts to grow vegetables in his garden and write a book about his adventures with Sophie (which is the actual BFG book by Roald Dalh). Sophie, having been assured earlier by the BFG that she would always have him for a friend, ends the movie by calling out to the BFG wishing him a good morning, and the BFG is able to hear her from Giant Country. 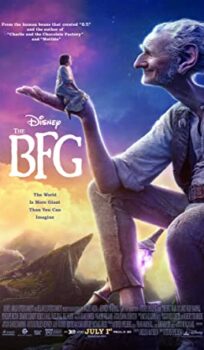