Meanwhile, Kumail’s parents keep trying to set him up with a Pakistani woman and declare that their only dream for him is to marry a Pakistani woman.  Emily finds out about this and they break up, as Kumail is not ready to disappoint his parents.

Emily becomes extremely sick and the doctor’s place her in a medically induced coma so that they can treat her raging infection.  While she is sick, Kumail realizes how much he loves her.

When Emily recovers, Kumail apologizes to her, but because she was in a coma, her wounds from the break up are still fresh and she doesn’t want to get back together.  Kumail then decides to move to NY with his friends to continue his comedy.

While performing in NY, a woman heckles him from the audience, and he sees that it’s Emily, and they recite their first conversation that they ever had together about the nature of heckling (as that is what she did the first time she saw him).

During the credits we see the real photos of the real Emily in an American wedding dress and a traditional Pakistani wedding dress. 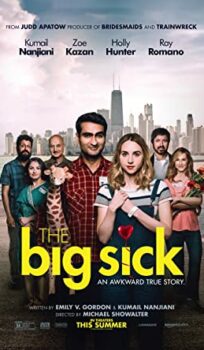